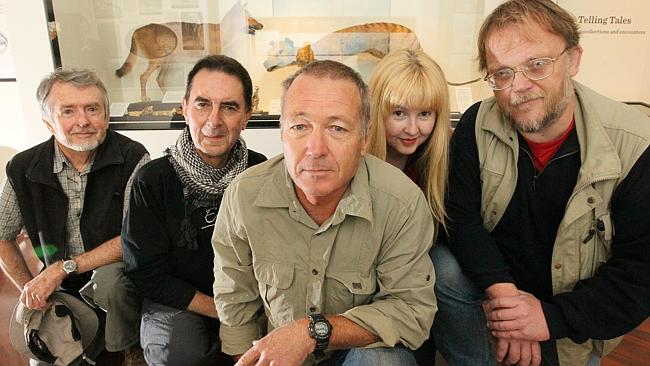 An international team of Tasmanian tigers trackers is back in the island state for another Toyota-sponsored expedition to find the fabled creature.

The group of naturalists, headed by Mike Williams, returned last week to search for the thylacine, which was officially declared extinct in the early 1980s.

The last captive thylacine died in Hobart Zoo in 1936.

Joining Mr Williams on his latest six-week search will be zoologists and thylacine hunters from Britain and Denmark.

The expedition is being run by the Centre for Fortean Zoology, based in the UK and Australia, which investigates “mystery animals” considered rare, extinct or undiscovered.

It will be the group’s second expedition after travelling south in October 2013.

But Mr Williams, from New South Wales, has personally been searching for the largest known carnivorous marsupial of modern times for more than a decade

“If someone said to me when I first started that 10 years on we would still be getting tips — our last one was a year ago — I wouldn’t have believed you,” he said.

“With the increase of people using crash (dashboard-mounted) cameras, we believe a local using one might be a good chance of stumbling across a thylacine while driving.”

The five-person team arrived in the state last week and has already been following up tips and speaking to people who claim they spotted the animal in the state’s north.

They will explore areas around northern Tasmania for about four weeks before shifting their focus to the state’s isolated south-west.

“Tasmania is recognised as one of the most biologically rich places on the planet, so it makes sense that the Tasmanian tiger could survive in remote parts of the state,” Mr Williams said.

“We believe that there is a breeding pack somewhere in Tasmania but we need proof.”

Robert Paddle, who wrote a book on the history and extinction of the thylacine titled The Last Tasmanian Tiger, said finding proof might be impossible.

“I would love to be proved wrong,” he said.

“But there is a definition of extinction and to change that you need a body.”


An international team of naturalists from the Centre for Fortean Zoology has returned to Tasmania to search for the Tasmanian Tiger, Thylacinus cynocephalus, in one of the biggest concentrated ongoing searches yet for the elusive animal, which was officially declared extinct in the early 1980s.

"Tasmania is recognised as one of the most biologically rich places on the planet, so it makes sense that the Tasmanian Tiger could survive in remote parts of the State," Mr Williams said.

"Tasmania is also something of an ark for Australia, acting as a final refuge for many species declared extinct on the mainland, such as the Eastern quoll.

“As on previous trips, we have already collected several compelling accounts of recent sightings of the Tasmanian Tiger. On this trip we're hopeful of finding scats, hair or footage to back up claims this rare marsupial remains active in these areas."

Danish zoologist Lars Thomas has joined this year's expedition, and said the Tasmanian Tiger has long been a source of interest for him.

"The Tasmanian Tiger is possibly one of the most fascinating 'extinct' animals I can think of - for me it's very much an animal of the Victorian era, evoking the frontier times of Australia's convicts, colonists, and early Aboriginal tribes," Mr Thomas said.

"I think it's one of the few supposedly extinct animals on the planet that has the biggest likelihood of surviving."