No myth-taking what he saw - it was a big cat! 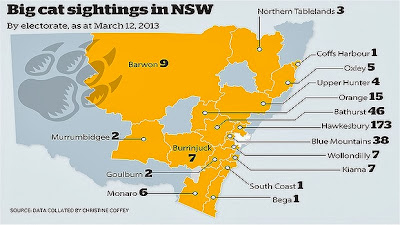 Weeks after the government declared the Blue Mountains big cat file closed, a Sydney father has spoken of a terrifying encounter with a panther-like creature outside his Riverstone, NSW home.

Peter Russell told NSW Police he feared for his life after being stalked by a large, ''completely foreign'' feline predator at Riverstone, on the fringes of dense national park bushland.

It has been sighted at least 12 times in the Riverstone area in recent years.

On December 5, Mr Russell went to investigate why his neighbour's dogs were acting ''so distressed''.
He said, as he looked along the path that led up the street, a very large, broad, cat-like creature ran straight for him.

''This was definitely no dog,'' he said. ''It had a low rumbling growl. It was between knee and hip height, extremely stocky and very fast. I spun on my heel and ran back towards the house. I didn't know that I was going to make it to the door.

''My mind was completely thrown by what I had just witnessed. I thought I was a goner.''

Mr Russell made it safely inside and called Riverstone police.

''The officer laughed and I acknowledged her reaction was understandable,'' he said. ''But I also explained that if some poor kid ends up being taken, and I hadn't called, I would be left devastated.''