The hunt is on for the Thylacine 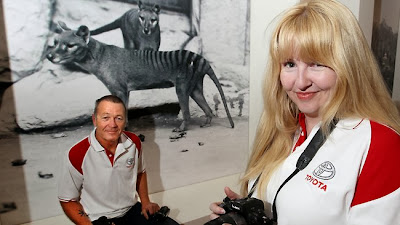 The thylacine has officially been put on notice: the hunt is on.

An international team of naturalists from the Centre for Fortean Zoology has arrived in Tasmania for the first in a series of well-resourced and professional expeditions into Tasmania's wilderness to hunt for evidence of the Tasmanian tiger.

Although the animal was officially declared extinct in the 1980s, reports of thylacine sightings are still common and expedition leader Mike Williams from NSW has high hopes that they can find something.

"The problem with a lot of the sightings from members of the public is that they're generally caught by surprise, and their photos are taken on things like mobile phones and aren't very good," he said.

"It will take really good quality video to really convince anyone and preferably a video shot by a person, so we've brought as much gear as we can to improve our chances of being ready if we do see one." Mr Williams is highly regarded in his field and has spent many years searching for evidence of the big cats that are said to roam areas of rural NSW and Victoria.

He is careful not to be too specific about the regions they will investigate in Tasmania, but said they would focus on the state's northwest and southwest.

"We're meeting up with some eyewitnesses to begin with and that will help us narrow down our search areas," he said.

This first expedition of 10 people will run for about two weeks and will be one of eight or nine expeditions over the next two years.

The expedition, sponsored by Toyota, includes British expeditioners Dr Chris Clark and Richard Freeman – who have searched for giant anacondas in Africa and the Indonesian equivalent of Bigfoot on the island of Sumatra – and Hobart-based Dr Hannah Jenkins.

The Centre for Fortean Zoology is based in the UK and Australia and investigates "mystery animals" that are considered rare, extinct or undiscovered, such as the big cats rumoured to live in the Australian bush, and Australia's Bigfoot, the Yowie.

The thylacine has a special place in the international organisation's ethos: it is featured on their emblem.

While in Tasmania the group will also busy itself searching for evidence of feral foxes and identifying healthy devil populations free of the facial tumour disease.

"Let's hope between our resources, those of independent researchers, and the government's, something comes to light," Mr Williams said.