Is Thylacine truly extinct? The CFZ team not convinced. 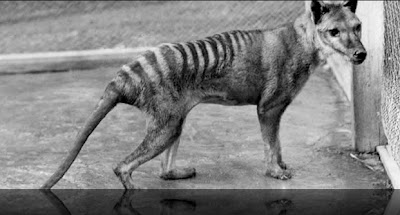 Humans may be responsible for the extinction of the West African black rhinoceros and the Caribbean monk seal, but what about the Tasmanian tiger? A team of zoologists is not so sure.

The Centre for Fortean Zoology (CFZ) recently launched a new hunt for the species, which was once endemic to Australia.

The Thylacinus cynocephalus, commonly called thylacine or Tasmanian tiger for its characteristic stripes, was determined to be extinct as early as 1982.

Researchers are now scouring near Smithton on the island of Tasmania, in an attempt to find evidence that the Tasmanian tiger endures. So far, the team has spoken to several locals who claim to have spotted the creature and have submitted samples of animal feces for DNA testing.

Speaking to The Guardian, CFZ Zoological Director Richard Freeman said he has "no doubt" the species still exists. He told the British newspaper:

The area is so damn remote, there are so many prey species and we have so many reliable witnesses who know the bush that I’d say there is a reasonable population of them left. ... The people who say they’ve seen it have nothing to gain and everything to lose. I’d say there is a population of at least 300 of them.
According to the International Union for Conservation of Nature, the last reported Tasmanian tiger was captured in the wild in 1933 and taken to Tasmania's Hobart Zoo. Believed to be the last of its kind due to the population's decimation by Australian hunters, the animal died after three years in captivity.

The question of whether the Tasmanian tiger is really extinct has plagued zoologists for decades. Every so often, researchers seek to disprove the species' extinct status by searching for new evidence of the thylacine's existence.

Zoologists have been unsuccessful to date, and the Australian government still holds that no conclusive evidence has been uncovered. Until it is, the possible existence of the Tasmanian tiger remains a mystery.