Extinct species may be alive 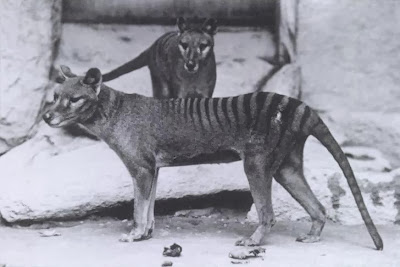 A species long believed to be extinct may be declared alive thanks to a team of British naturalists set on finding the elusive wild animal.

A group from the Centre for Fortean Zoology has began looking for the Tasmanian tiger, also known as the thylacine, in Tasmania's northwest, where clues to the animal's existence have reportedly been found, The Guardian reports.

The last confirmed sighting of a Tasmanian tiger was in 1933, when one was captured and taken to the Hobart Zoo. It died three years later and the species was declared extinct in the 1980s. While there have been numerous sightings since then, none have been confirmed, according to the International Union for Conservation of Nature and Natural Resources.

The animal, which looks like a large, long dog with stripes, was usually mute – except while hunting, when it made distinctive yaps. The arrival of European settlers are partially to blame for the Tasmanian tiger’s extinction where bounties were placed on thylacines’ heads, effectively wiping them out.

Previous photographic searches conducted between 1988 and 1993 were inconclusive. Even the latest expedition has little support from the scientific community. "It would be great to have traditional scientists on board, but most scientists wouldn't put their name to this sort of thing anyway," expedition leader Mike Williams, a landscaper from New South Wales, told The Examiner.  "Let's face it, it's not going to enhance your career with this sort of fringe subject."

The team says they have spoken to several “highly credible” witnesses who have seen the Tasmanian tiger, including a forestry worker who reportedly saw the animal in daylight in 2011, and have collected animal feces that could belong to the thylacine which will be sent away for DNA analysis.

Richard Freeman, zoological director for the Centre for Fortean Zoology, firmly believes the Tasmanian tiger still exists. “The area is so damn remote, there are so many prey species and we have so many reliable witnesses who know the bush that I’d say there is a reasonable population of them left,” he said. ““The people who say they’ve seen it have nothing to gain and everything to lose. I’d say there is a population of at least 300 of them.”