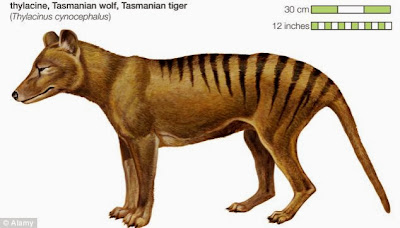 It has been ‘officially extinct’ for decades, but two British scientists have set off across the world to hunt for the curious animal known as the Tasmanian tiger.
The last known tiger died in captivity in a Tasmanian zoo in 1936, but a team of enthusiasts believe there is still a chance that several of the animals might still be roaming the forested regions of the island state.
British scientists Dr Chris Clark and Richard Freeman, who have searched for giant anacondas in Africa and the Indonesian equivalent of Bigfoot, are due to arrive in Tasmania today (November 1, 2013) to join an expedition searching for the tiger, which has a dog-like appearance and a striped body.

‘This is very serious and we’re putting aside all the other crazy things like Bigfoot hunts and concentrating very much on getting the first convincing evidence that the Tasmanian tiger still exists,’ expedition leader Mike Williams told the MailOnline from the search base in the island capital, Hobart.
While there have been reported sightings of the tiger, known scientifically as a thylacine, Mr Williams said the evidence has never been strong enough to be convincing.
‘The problem with a lot of the sightings from members of the public is that they’re generally caught by surprise and their photos are taken on things like mobile phones and aren’t very good.

‘It will take really good quality video to really convince anyone so we’ve brought as much gear as we can to improve our chances of being ready if we do see one.’
Dr Clark and Mr Freeman, from Britain’s Centre for Fortean Zoology, have explored many of the world’ outstanding mysteries and remain dedicated to cryptozoology - the study of unknown animals.
The centre is based in an old country house in Devon, parts of which are over 200 years old, and which is said to be home to several ghosts.
The Tasmanian tiger features strongly as a ‘most wanted’ animal among the centre’s members - a picture of one is used as the group’s emblem.

The British researchers, along with Mr Williams and his expedition members, will be searching densely forested areas in the island’s north and south west.
‘If we didn’t think there was even a slim chance of stumbling upon evidence in the form of droppings, hair or footage then we wouldn’t have committed to this expedition,’ said Mr Williams.
‘Thylacine sightings are still being reported right across the state of Tasmania, 27 years after it was declared extinct by the Tasmanian government.’
The team will be using two powerful four-wheel-drive vehicles which will be loaded with cameras, dashboard video cameras and powerful binoculars.
The thylacine is believed to have roamed the Australian mainland in ancient times before it became extinct there about 2,000 years ago - but it continued to thrive in Tasmania.
But the arrival of Europeans sealed its fate. The animal was hunted for its fur and because it was responsible for attacks on settlers’ sheep, resulting in alarming photographs showing gunmen standing proudly beside the corpses of piles of animals they had shot down.
With the death of the last known tiger - referred to as Benjamin - in the Hobart zoo in 1936, all that has remained of the elusive animal in recent times has been reported sightings in isolated parts of Tasmania.