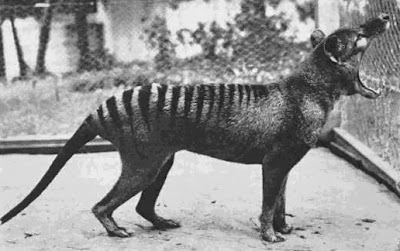 It had been considered extinct for nearly 80 years, but the Tasmanian tiger has been declared alive and kicking by an intrepid group of British naturalists.

A team of investigators from the Centre for Fortean Zoology, which operates from a small farmhouse in north Devon, is currently in Tasmania hunting down clues to prove the thylacine, commonly known as the Tassie tiger, still exists.

The group claims to have gathered compelling evidence of the thylacine’s presence in remote parts of Tasmania’s north-west, despite the last known animal dying in Hobart Zoo on 7 September 1936.

The Centre for Fortean Zoology said it has talked to several “highly credible” witnesses of the thylacine and has found animal faeces that could belong to the beast. The droppings have been preserved in alcohol and are being sent awayfor DNA analysis.

The cryptozoologist team, which has previously attempted to find the yeti and boasts that has evidence of a mysterious Indonesian ape that walks on two legs, is one week into a fortnight-long trip to discover if the thylacine still exists.

Richard Freeman, zoological director of the organisation, told Guardian Australia he has “no doubt” the species still roams isolated areas of Tasmania.

“The area is so damn remote, there are so many prey species and we have so many reliable witnesses who know the bush that I’d say there is a reasonable population of them left,” he said. “I’d say there are more of them around in the world than Javan rhinos.” The World Wildlife Fund estimates that there are just 35 Javan rhinos left.

Freeman said he had spoken to a forestry worker who had seen an animal in daylight in 2011 which was distinctive because of its striped rear end, long stiff tail and “weird rolling motion, almost like a cow” when it walked.

He admitted that no pawprints or dead thylacines have been found, attributing this to the sparse rocky ground of the region and the ferociousness of Tasmanian devils, which swiftly devour animal corpses when they discover them.

However, Freeman said he had heard reports of distinctive thylacine kills, where prey is effectively disembowelled, as well as the discovery of the droppings.

“If we get the DNA from them, that’ll be interesting,” he said. “They are far too big for a Tasmanian devil and it can’t be a dog. Why would a dog be so far out there? It’s a very remote area.

“We’ve been baiting and also setting up camera traps. We’ve seen a lot of devils and a feral cat, but nothing else so far. It’s only been up for a week, though, and it can take months. In the UK, we saw deer, otters and even a woman taking a pee on a bush before we saw anything interesting.”

The thylacine, which looked much like a striped, elongated dog, was zealously hunted by European settlers. They were trapped, snared, shot and poisoned, due to fears the animal would ravage sheep stocks.

Several attempts have been found to prove the animal still exists, although the Tasmanian government states that there is “no conclusive evidence” it lives on.

“I’ll be coming back again and again,” he said. “The people who say they’ve seen it have nothing to gain and everything to lose. I’d say there is a population of at least 300 of them.