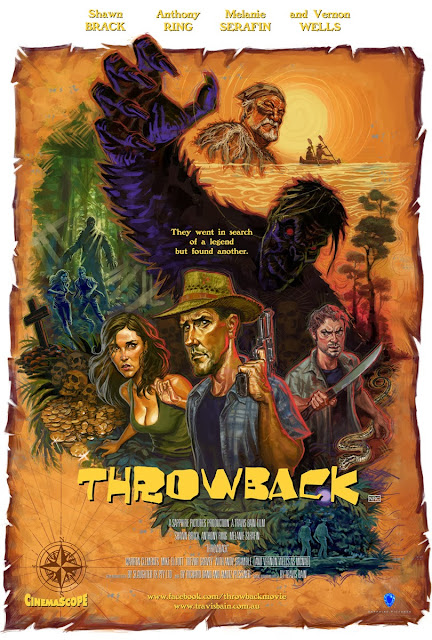 We love a good movie poster and this one is a pearler!

A new poster has been released for the upcoming Australian horror feature "Throwback."

Designed by Brazilian artist Juarez Ricci, the retro-style poster evokes the '60s/'70s creature features and pulp adventure movies that inspired the film itself.

"From the get-go I knew I wanted an illustrated poster rather than your typical modern 'floating heads' Photoshop design," Bain says. "Juarez's work reminds me of the old Drew Struzan and Richard Amsel posters I grew up with, so he was a natural choice to create this artwork."

"Throwback" follows two modern-day treasure hunters, a female park ranger and an unhinged ex-cop as they tangle with a Bigfoot-type monster known as a Yowie in the remote jungles of northern Australia. The film stars Shawn Brack, Anthony Ring, Melanie Serafin, and Vernon Wells of "The Road Warrior" and "Commando" fame. The new one-sheet poster is available for collectors to purchase at: www.zazzle.com/throwback_one_sheet_movie_poster-228922243441439784

"Throwback" recently premiered at the Bram Stoker International Film Festival in England, and Australian and North American premieres are expected to be announced over the coming months. Already the film has received strong interest from the prestigious Tribeca Film Festival in New York, which recently invited Bain to submit "Throwback" for consideration for their 2014 programme.

"It's not an official acceptance, but it's a step towards one," Bain says. "They're very keen to see the film, so we're crossing our fingers they'll select it for their Midnight Section."

"Throwback" is expected to be released on DVD, Blu-ray and VOD in 2014. For film festival or distributor enquiries, visit www.travisbain.com.au or www.facebook.com/throwbackmovie.