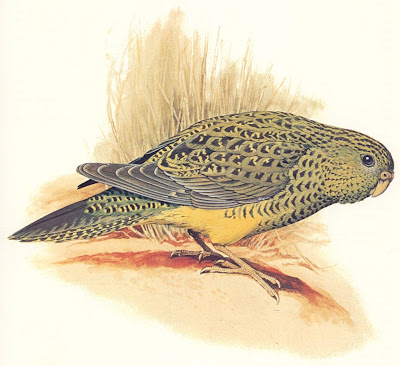 The rare Australian Night Parrot (Pezoporus occidentalis) has been caught - on camera, that is - by a Queensland wildlife photographer.

We have posted numerous stories on this blog over the years about the nocturnal ground-dwelling bird (that some have unkindly described as a fat budgie), which had seemingly vanished from its outback Australian haunts, the spinifex grasses of the dry interior of the country.

Wildlife photographer John Young has spent more than 17,000 hours out in the field and notched up 15 years of searching, and says he has finally captured several photos and a 17-second video of the bird in western Queensland.

Last week he presented his evidence to more than 100 excited bird enthusiasts at the Queensland Museum under a cloak of secrecy, forbidding photographs and video. A commercial deal with a media company means Mr Young cannot publicly distribute the pictures.

"The night parrot is the Holy Grail of world bird-watching, it's probably the hardest bird in the world to see," he told the ABC.

Mr Young will not say exactly where the photos were taken in the hope it will protect the bird from poachers.

Watch the ABC's interview with Mr Young here.
Posted by RR at 21:03