Climate change didn't cause extinction of megafauna in Australia 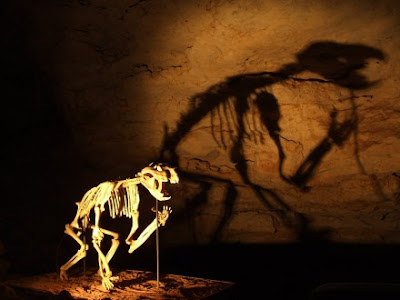 Researchers have ruled out climate change as the cause of extinction of most of Australia’s giant animals, including giant kangaroos, three metre-tall flightless birds and the Tasmanian tiger, around 50,000 years ago.

There has been much debate over the cause of the extinction of Australian’s giant animals or ‘megafauna’, says Professor Patrick De Deckker from the ANU Research School of Earth Sciences.

“The extinction happened around the same time as humans moved into the area, which also coincided with a change in the type of plant food available to megafauna,” Professor De Deckker said.

“These events have led to several theories of the cause of extinction, including climate change. But the timing of these events was uncertain. We didn’t know which one happened first, so we couldn’t begin to understand what could have caused the extinction.”

Professor De Deckker and his ANU colleagues, in collaboration with a team in the Netherlands, analysed a sediment core taken from the sea bed, off the coast of Kangaroo Island in the offshore canyons of the Murray River.

“Sediment cores provide a record of the past,” said Professor De Deckker. “From the core we were able to reconstruct sea-surface temperature over the past 135,000 years, as well as variations in the type of vegetation in the Murray Basin, allowing us to piece together the order of these events.”

The team found that sea-surface temperature varied by only 3°C at the time of the extinction – a minor variation compared to other times in the record – indicating that the extinction did not occur in a period of major climate change.

The core also revealed a shift in vegetation type immediately after the megafaunal extinction.

“Before and during the extinction period, 70 per cent of the vegetation was typical of northern Australia today. Immediately after the extinction, this value dropped to 35 per cent,” said Professor De Deckker.

“Some people have suggested that this dramatic change in food sources might have been the cause of the megafaunal extinction, but we’ve shown that this was in fact a result of the extinction. Our idea is that with fewer herbivores around to eat them, substantial fuel remained in the landscape, which eventually led to massive fires.

“Our work unveiled the presence of a compound in the core that is produced as a result of plant material burning. This compound appeared after the megafaunal extinction and lasted some 3,000 years.”

“The nature and relative timing of these events turns out to be exactly as first hypothesised by Professor Tim Flannery in 1990,” said Professor De Deckker.

“Professor Flannery suggested that the abrupt extinction of the herbivorous megafauna meant shrubs grew unchecked, increasing the amount of flammable material. This explanation has caused considerable and ongoing controversy, but is now supported by our evidence.

“While clearly demonstrating significant ecosystem after-effects of megafaunal extinction, the evidence from the core does not provide an explanation for the cause of the extinction, it does not support climate change as a cause.

The research is published in the journal Nature Geoscience.