A new species of fungus that causes life-threatening infections in humans and cats has been discovered by a University of Sydney researcher.

"This all originated from spotting an unusual fungal infection in three cats I was seeing at the University's cat treatment centre in 2006," said Dr Vanessa Barrs, from the University's Faculty of Veterinary Science, whose findings have just been published in PLOS One.

"These cats presented with a tumour-like growth in one of their eye sockets, that had spread there from the nasal cavity. The fungal spores are inhaled and in susceptible cats they establish a life-threatening infection that is very difficult to treat."

Six years of investigation followed, including working with some of the world's leading fungal experts at the CBS-KNAW fungal biodiversity centre in The Netherlands.

"Finally I was able to confirm this as a completely new species, Aspergillus felis, which can cause virulent disease in humans and cats by infecting their respiratory tract. We were able to demonstrate that this was a new species of fungus on a molecular and reproductive level and in terms of its form.

"Similar to the closely related fungus Aspergillus fumigates, this new species of fungus can reproduce both asexually and sexually - and we discovered both phases of the fungus."

Since the first sighting of the new species, more than 20 sick domestic cats from around Australia and one cat from the United Kingdom have been diagnosed with the fungus.

The fungus appears to infect otherwise healthy cats but in the two humans identified it attacked an already highly compromised immune system.

The disease is not passed between humans and cats but its study in cats will not only help their treatment but provide a good model for the study of the disease in people. There is only a 15 percent survival rate of cats with the disease and it has so far proved fatal in humans. To date only one case has been identified in a dog.

"We are right at the start of recognising the diseases caused by this fungus in animals and humans. The number of cases may be increasing in frequency or it may just be we are getting better at recognising them," Dr Barrs said.

"Fungi like Aspergillus felis can be easily misidentified as the closely related fungus Aspergillus fumigatus, which is a well-studied cause of disease in humans. However, A. felis is intrinsically more resistant to antifungal drugs than A. fumigatus and this has important implications for therapy and prognosis."

The next step for Dr Barrs and her team is studying fungi in culture collections throughout Australia to determine the prevalence of A. felis infections in people with previously diagnosed aspergillosis. They will collaborate with researchers at the Westmead Millenium Institute for Medical Research. 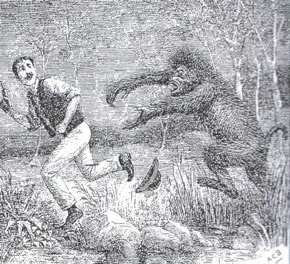 A Yowie has been sighted on Bangalow Road, just north of Bexhill by a Lismore resident.

The witness said the creature moved across the two lanes of bitumen, raising his arm to apparently shield its eyes from the bright high beam glare of the approaching car.

"I would have seen it for between 20 and 30 seconds," the witness recalled. "It was really moving at the time. It leapt the fence no problem. All I can remember was seeing this large black object with a solid build, lanky legs and long lanky arms.

"It wasn't clothed ... it wasn't wearing clothes like a human."

The witness said the creature ran with a fast, stooped pace. It had high shoulders and almost no neck and a small head.

"It was like its head was shrunken into its shoulders."

Sydney-based yowie researcher, Paul Cropper, said the recent sighting revealed some "classic" elements which provided a common thread linking many experiences by many people over many decades.

"The fact that this thing was heavy set, with long arms and a small head ... these are classic traits," Mr Cropper said.

The area where the yowie was seen has a long history of similar sightings with stories running in the local paper, The Northern Star, since the 1800s.


University of Adelaide researchers have developed a simple and cost-effective DNA test to identify kangaroo species from their droppings which will boost the ability to manage and conserve kangaroo populations.

The researchers developed the test using hundreds of collected droppings across north-eastern Australia and extracting DNA from the samples, published in the conservation journal Wildlife Research.

A unique pattern of DNA fragmentation was established for each species, eliminating the need for gene sequencing which is costly, much more time-consuming and requires sophisticated laboratory equipment.

The test has already identified a number of species of kangaroo occurring well outside their known range which has important implications for population management and conservation.

"The more information on the distribution of species, the better management decisions can be made, particularly in gauging potential land-use and climate change impacts on biodiversity," says PhD student and lead author Jessica Wadley.

"Despite their large size, kangaroos and wallabies are surprisingly difficult to see and count reliably. Collecting droppings, or scats, provides a relatively simple and easy way to estimate the presence or absence of a species. But in this area of Queensland, where there were eight possible kangaroos and wallaby species with overlapping ranges, it's difficult to correctly identify which species is leaving which scat."

This project, by the University of Adelaide's Australian Centre for Ancient DNA (ACAD) and Environment Institute, is part of a broader ecological study.

They found five species outside of their known range with one - the Eastern Grey Kangaroo - 400km outside of its range.

Co-author Dr Damien Fordham, Postdoctoral Fellow in the Environment Institute, says: "The test also allowed us to identify samples from the antilopine wallaroo, a species that is threatened by climate change. We're carrying out more detailed genetic studies relating to the factors that influence its distribution."

Co-author Associate Professor Jeremy Austin, Deputy Director of ACAD, says: "The test could also be used to rapidly and cheaply identify the source of kangaroo meat and products to detect illegal hunting of protected species."