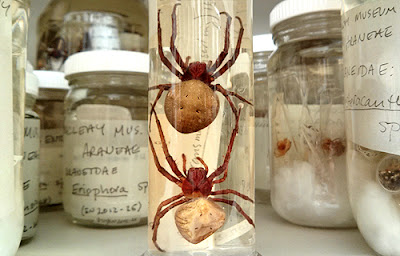 It's an arachnophobe's nightmare: in the bowels of the University of Sydney's Macleay Museum, there are more than 1100 vials of spiders collected in the 19th and 20th centuries.

In a recent free public talk on Wednesday 29 May, arachnologist Helen Smith, Macleay Miklouho-Maclay Fellow 2011-12 at the Macleay Museum and Research Associate at the Australian Museum, took her audience on a journey through the collection, part of the oldest natural history collection in Australia.

Because of the collection's antiquity, the Macleay's spiders come with their fair share of mysteries - why, for example, are small, common spiders underrepresented in the collection when there are so many large spiders? What happened to some important specimens that have gone missing in the collection? Why have we changed the way we collect and store spiders over time?

Now a self-confessed spider nut, one reason Helen actually began studying spiders was to prevent her from developing a fear of them.

"I was always into creepy crawlies, even as a kid, but when I moved to Australia from England I got a little bit freaked by the fact I knew there were things here that were dangerous, but I didn't know what they were," she says.

"So I started looking at spiders as a way of addressing my need to know, because I wasn't prepared to be scared by something that I knew intrinsically I shouldn't be scared of, and that I hadn't been scared of before."

The Macleay's spider collection is significant in the study of Australian natural history, and contains several 'type specimens', which are used as reference specimens when a new species is described.

"It's significant because there's a lot of old material from the very early collectors. There's a big focus on old material collected by the Macleay family and people who collected for them," Helen says.

"You get a story about how people collected and what they were looking for, which is quite different from what we do today in modern collections."

Helen's interest in the Macleay collection started during her PhD, when she had difficulty finding a type specimen needed for her research within the collection. As part of her Macleay Miklouho-Maclay Fellowship, granted by the Macleay Museum, she has now catalogued the entire wet collection to make it more searchable and accessible for future research.

She is also naming a previously undescribed spider she has discovered after the Macleay Museum.

The Fellowship is funded by contributions from a large number of donors in 1988, the centenary year of the Macleay Museum.