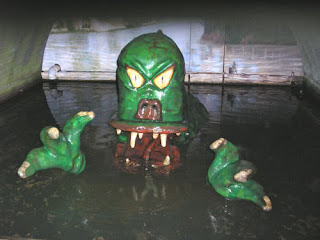 European settlers of the 1800s were told about the bunyip by local Aboriginies, according to the City of Murray Bridge website.

The bunyip was said to live in creeks, riverbeds, waterholes and swamps, emerging at night to terrify and devour any animal or human prey in the vicinity. Its terrifying cries were said to ring out, disturbing the stillness of the night. Lonel and isolated white settlers heard these unfamiliar sounds, wondering and worrying about the existence of an animal monster, native only to Australia.

Aborigines seemed genuinely afraid of the creature and would not go near any area of water where they thought a bunyip might be lurking. Settlers were anxious to prove or disprove its physical existence. Various believed the sightings of bunyips and were reported in the press with the findings of fossil bones being scientifically examined.

It was not until the turn of the century that the physical existence of the bunyip was disproved.