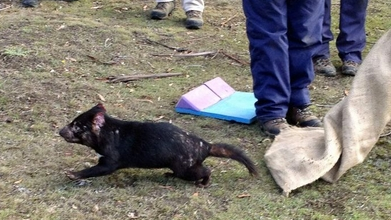 Tasmanian devils are busily breeding on Maria Island in a special colony free of the facial tumour disease decimating the species.

Fifteen healthy devils were released on Maria Island, off Tasmania's east coast, five months ago and that population is set to double with the group already breeding.

Pouch young have been found in five females trapped as part of the Save the Tasmanian Devil Program's monitoring of the population.

Fifteen baby devils, now resembling finger-nail sized pink blobs, are expected to also be running around the island by September.

"To see them breeding now is a really big boost to our morale," wildlife biologist Phil Wise told reporters. "They've established well, they appear to be slotting into a normal devil life."