From the archives: 1939 'bunyip' sighting had district agog 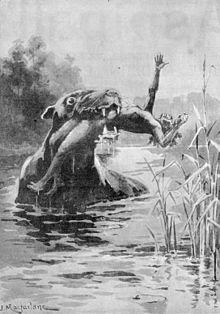 LOWOOD had a "Bunyip" in December 1939. News had been circulated that some strange creature in the Brisbane River was taking Mr John Roulston's calves. A watch was kept but nothing definite could be established.

This "strange creature" was "seen" at Wivenhoe, Lowood and Fernvale, yet no one could explain what it was really like.

One night, Mr C.H.D. Lindemann, among other opossum shooters, when walking along the river bank near Lowood caught sight of what appeared to be a bunyip crossing the river. Shots were fired at it but missed the creature.

The whole district was soon agog with the excitement of the hunt and a reward of 200 pounds was offered for finding the creature.

An organised hunt was arranged and rifles and ammunition were made available at the Drill Hall. In charge of the hunt was an officer of the K Company Moreton Regiment.

With so much firing of guns, one of the bullets "cut the wire" which had been pulling the strange animal across the river.

The whole thing had been a hoax and it was later found that Mr C.H.D. Lindemann was the perpetrator.

The "bunyip" was a box covered with wallaby hide with swansdown ears and leather sewn on for its nose. It had been made by Messrs Lindemann and F.Smythe who was a bootmaker.

The two men had fastened the "bunyip" to a wire across the river and it was worked by a device and pulleys by Mr Jack Lindemann on the Lowood side.

Later the body of the "strange creature" was taken to Lowood where it was viewed by hundreds of people. All southern newspapers gave it widespread publicity.