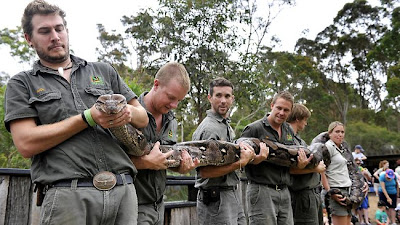 Atomic Betty, as she's known, is a 14-year-old, 6.5m articulated python - the only snake in the world considered a true "man eater''.

The powerful python was due for her annual weigh-in this week at the Australian Reptile Park, the Daily Telegraph reported.

It took six keepers to catch and bag the enormous snake - considered the most dangerous animal at the park, more so than the resident 5m crocodiles - inside its enclosure before it was weighed, tipping the scales at a whopping 139kg.

Native to South-east Asia, reticulated pythons are the world's largest snake and can grow to 8m with a life expectancy of about 30 years.

Atomic Betty is believed to be the largest snake in Australia having grown to 6.5m after being imported from the US in 2001.

Her diet consists of three to four 25kg goats a year.