Finding Bigfoot (or not) Down Under 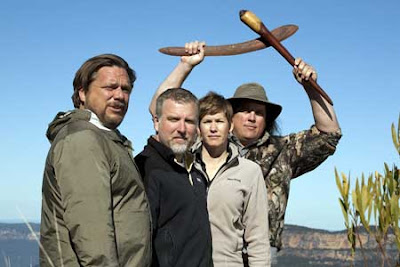 In 2011, the Finding Bigfoot team travelled to Australia to look for evidence of the Yowie. The resulting program was aired this week in the US.

As the program teaser states:

The team travels half way across the world to investigate recent reports of Australia’s yowie, a creature similar to sasquatch in both appearance and behaviour. They traverse deep into the jungle in hopes of proving bigfoot’s cousin down under is real.

We hope the crew from Finding Bigfoot had fun while they were Down Under - because it looks like they ultimately came up empty-handed. The only real 'score' of the trip seems to be some dubious 'vocalisations' recorded by the team.

Some of the personal experiences shared at one of the show's popular 'town hall' style meetings were interesting, however if you're looking for a serious analytical program then this probably isn't it.

But who are we to spoil the fun? They all seem like friendly guys, and there are plenty of amusing exchanges between the hosts (although their Australian gags will fall a little flat with antipodean audiences).

There is a reason this program rates as highly as it does!

Catch part of the episode here: