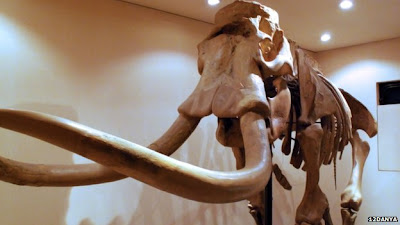 Thank you to Brad Wolfe for this gem!

Wild elephants living in North China 3,000 years ago have been identified as belonging to the extinct genus Palaeoloxodon.

They had previously been identified as Elephas maximus, the Asian elephant that still inhabits southern China. The findings suggest that Palaeoloxodon survived a further 7,000 years than was thought.

Their findings correlate with other recent paleontological discoveries that further large mammal species, thought to have died out at the end of the Pleistocene, actually lasted in to the Holocene.

These include the woolly rhinoceros (Coelodonta antiquitatis), woolly mammoth (Mammuthus primigenius) and the aurochs (Bos primigenius).

Such discoveries suggest that the extinction period of many Pleistocene land mammals may have lasted longer than was previously thought.