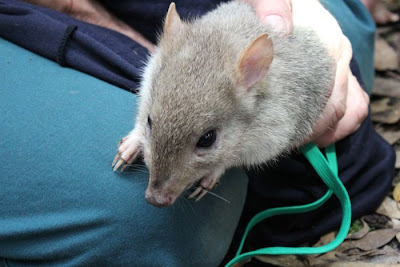 Thanks again to Brad Wolfe for spotting and sharing this great news.

A rare marsupial long disappeared from Australia's mainland is now thriving near Canberra, with reports the population is fat and happy.

Last year a group of 17 eastern bettongs were brought to protected forest areas in Canberra from Tasmania, their first appearance on the mainland for 80 years.

Adrian Manning, from the Australian National University, says health checks show the small members of the kangaroo family are faring well, with about 35 bettongs leaving the pouch and about 20 more young on the way.

"They've hit the ground running, digging for truffles - which is what they do - and they've actually put weight on" he said.

"The fact that six months in, most of the animals seem to be doing well, putting on weight, breeding, those are all signs that they're happy.

"I don't think we could really have expected any better than we've got, so the whole team's really pleased."

This year, researchers will examine how the bettongs adapt to the environment, and what affect they have on the ecosystem.

And there are plans to eventually move some of the bettongs to sanctuaries and restoration projects in other parts of south-east Australia.