Tasmanian Devils on the lamb in WA 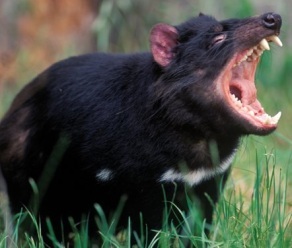 Three Tasmanian Devils have been enjoying the fruits of freedom in WA after escaping from Peel Zoo.

One of the devils has already been caught and returned to the Zoo.

The four-month-old male devils - Itchy, Scratchy and Genghis - escaped from Peel Zoo, on the outskirts of Pinjarra, south of Perth, after a tree smashed their enclosure on Tuesday.

Zoo owner David Cobbold said Scratchy was found at about 3am today but the other two hand-reared animals remained on the loose.

Mr Cobbold said two men chased Scratchy through the bush and trapped the animal against a fence before wrapping it in a towel.

They then secured it in their bathroom, but Scratchy clawed its way through part of the plasterboard wall.

Mr Cobbold thanked the men but said people should not try to handle the animals themselves.

"The capture proved devils aren't as dangerous as their reputation suggested,'' he said.

"The name is more about the noise than the behaviour.''

Mr Cobbold has urged members of the public who see the remaining two devils to call him on 0400 788 289.