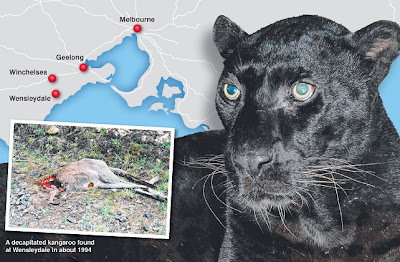 Here, at the foot of the Otway Ranges, grass was still abundant from the spring and farmers well versed in their craft. Yet death was stalking at night.
Full grown sheep had been found killed in the most savage ways, necks bitten in half, rib-cages shredded.
Then calves also started to be found in paddocks - lying in a pool of their own entrails.
A local grazier, experienced with the insane maulings of dog packs, knew something much more lethal was ranging his paddocks when the sun went down.
He called for help.

In November 1991, records show the farmer phoned the closest government wildlife office, then the Department of Natural Resources and Environment, in nearby Geelong.
Their most experienced man, a land protection officer with fisheries and wildlife credentials, was 34-year-old David Cass based at Meredith.
After six years with the department, David had already seen many ugly incidents, but even today he still remembers the first time he saw one of the carcasses.

"It was just peeled open, the force that was applied just staggered me, it was bizarre."
David took photographs and then interviewed the farmer who finally offered information about big cat sightings in the area.
"I'd heard the myth about the big cats, but in my job I was trained to deal with facts," David said.
He considered marauding dogs the logical explanation for the deaths when he returned to the office to file a routine report.
"The landowner was no dummy and he was a good bushman, so I took what he said seriously."

The grazier had also kept a meticulous map of where the stock deaths had been occurring on the farm, complete with coloured pins denoting whether they were sheep, calves and even wallabies.
David had a busy workload, but after filing his report he checked around the Winchelsea area for any other cases of mysterious stock losses.
There were plenty.

"Local people were hesitant to talk, they thought it could be big cats ... but they were scared of being called a looney," David said.
The farmer later called David directly, saying he had found unusual animal faeces in one of the paddocks, close to where a sheep had been mauled.
It was to be the clue that solved the mystery.
David was intrigued and travelled down to the farm again.

"They were large faeces, it was distinctly different in size, colour and smell to anything in my experience."
He carefully bagged and tagged the specimen and hand delivered it to Barbara Triggs, Australia's leading authority in the analysis of scats (animal faeces).

A comparative sample was needed, so David then contacted the Melbourne Zoo and a veterinarian supplied faeces and some hairs from their own black leopard.
The smell was "very similar", according to Triggs. She managed to extract four hairs from the scat.
It was thought the animal had swallowed the hairs while grooming itself.

Triggs examined the hairs under a microscope and again said they were "very similar" to the hairs from the zoo leopard.
"There was a possibility that the Winchelsea faeces were from a big cat such as a black leopard."
There was not enough evidence to make a positive identification. A second expert, Hans Brunner, was asked for his opinion, but he was also uncertain although he eventually said "a large panther-like animal could not be excluded".
Both the farmer and a dogged David Cass wanted more.

DNA sampling back in 1991 was new and more costly than it is today and, according to David, the department refused to pick up the cost.
The remaining hairs went into a plastic bag stored with the department.
There they remained until August 2000 where a young research scientist agreed to look at the them.

Dr Stephen Frankenberg was working at La Trobe University's Department of Zoology.
The DNA testing was as conclusive as a cautious scientist would allow.
The source of the sample was Panthera pardus, he found.
A leopard.
Dr Frankenberg said there was slight risk of contamination of the sample before the hairs had reached him and he refused to be drawn into saying the result was 100 per cent accurate.
Still, his explosive finding gathered dust until it was published last week in the Victorian Government's big cats study.

Dr Frankenberg is today a research fellow in developmental biology with the University of Melbourne.
Dr Frankenberg told The Weekly Times it was impossible to give a percentage probability of the reliability of the result because there were too many unknowns.
"If I had done the test on a sample from Africa, I would have had no strong reason to doubt it and I would say 99 per cent.
"But there are so many subjective factors that argue against its reliability, such as no other hard evidence of wild black leopards in Australia."

Dr Frankenberg said he agreed with the State Government's decision not to invest heavily in further research on the existence of big cats.
"But I do think it would be worth keeping an official 'open mind' and establishing a system for properly analysing evidence that might arise opportunistically in the future."

After 17 years with the public service, rising to become the state's top fisheries enforcement officer, David Cass is now working part-time in northern Queensland."I started out as a sceptic and I was not absolutely convinced until the Frankenberg result," David said.
"It was the Eureka moment, he might be hesitant now, but at the time it was definite."
He said "my superiors buried the information" because they did not know what to do with it.
"I am happy the truth has come out now.
"We might not be so sure about there being lots of wild cats in Victoria, but we can be positive, in 1991, there was a leopard where it shouldn't have been at Wensleydale."

*This case was mentioned in Australian Big Cats: An Unnatural History of Panthers. The authors were asked at the time to refrain from naming the individuals involved, so made brief mention of the case in their Analysing the Evidence chapter and reproduced the Winchelsea paperwork in the appendix.