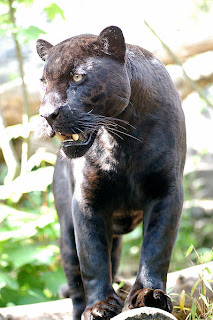 A study by Deakin University in 2001 concluded "a big cat population in the Grampians mountain range is beyond reasonable doubt''.

A Wimmera reader, who did not wish to be identified, said his father was stationed with the US servicemen at the Grampians camp for several months in 1942.

"They were called to go home to America and were told they could not take their mascots with them, they were two pumas,'' the man said.

"The handlers took them out into the bush, and were supposed to destroy them, but let them go instead.''

"In about 1950 my father was at a horse sale in Hamilton and he overheard two farmers talking about losing stock.

"One chap said he had shot a big cat savaging his stock.

"The other man asked what he had done with it?

"He said he had buried it as quick as he could so he wouldn't get into trouble.''

Other theories have it that the fabled big cats are descendants of puma brought to Australia by American goldminers during the gold rush in the mid-nineteenth century.

The Victorian Government last week end its "desk-top search'' for the big cats.

A government report said it was highly unlikely a living population of big cats existed.

Agriculture Minister Peter Walsh said the study, a pre-election commitment from the Coalition, found there was a lack of hard evidence to substantiate that a population of wild big cats exists in Victoria.

The study said the most obvious explanation for many of the reported sightings of big cats over the years is that they were large feral domestic cats.

Mr Walsh said there had been thousands of reports of big cats in Victoria over the last century but until now there had never been a comprehensive and co-ordinated attempt by any Victorian Government agency to collate the information in order to make a fully informed assessment.

The report did reveal scientific evidence of big cat which roamed the Winchelsea area in the 1990s.
Posted by RR at 21:15