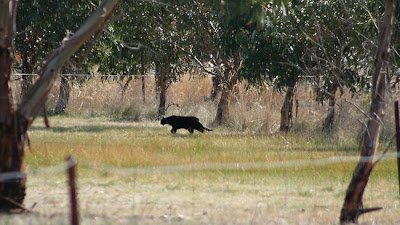 A Victorian Government investigation has concluded it is "highly unlikely" there are wild big cats living in Victoria, the ABC reports.

It found the most obvious explanation for reported sightings of big cats was that they were large feral domestic cats.

Agriculture Minister Peter Walsh has refused to say how much the survey cost, except to say it was conducted using existing departmental resources.

He says the study noted it was difficult to explain some reports from farmers and hunters of reports of animals that do not look like feral cats.

"Some preliminary DNA evidence also cannot be entirely dismissed but it is not sufficiently conclusive to prove beyond a reasonable doubt the identity of an animal," he said.

Mr Walsh says the investigation would only be reopened if there was primary evidence in the form of a carcass or skeleton.

"I'm sure there's people out there who will say they will swear black and blue there are still big cats out there," he said.

The Opposition says the State Government decision to end the hunt for wild "big cats" in Victoria is long overdue.

John Lenders says the government already knew there were no big cats and the search was just a distraction from budget cuts.

"Last year I got a Freedom of Information document that shows that on four occasions the Department had told the Minister there was no big cat," he said.

"We also know that in 1982 there was a survey in Victoria which is on the record, and there were two in NSW in the last decade saying there were not big cats."

One man who does understand the Victorian Government's rationale in conducting the study is Tim The Yowie Man, who is based in Canberra.

Mr The Yowie Man changed his name to reflect his passion for crypto zoology, or, the study of hidden and strange animals.

He is the first to admit his discipline is open to ridicule but he says the stories of big cats and other exotic creatures come thick and fast from around the country and it is a serious business.

"They're from all over Australia, not just Victoria. There's stories of them in the south-west corner of Western Australia, and in many places up and down the Great Dividing Range, including the Blue Mountains near Sydney and the New England area of New South Wales," he said.

"So it's certainly entrenched I guess in our folklore."

Despite today's development he is hopeful Victoria and Australia has not seen the last of big cats.

"Big cats, or pumas, are out there, but as yet and as this scientific study seems to have indicated, there's no scientific evidence to suggest they're there," he said.

"But that doesn't mean it will stop people like myself looking for them because I hope that one day myself or someone else will actually find evidence of one of these big cats roaming out there in the bush."
Posted by RR at 21:36