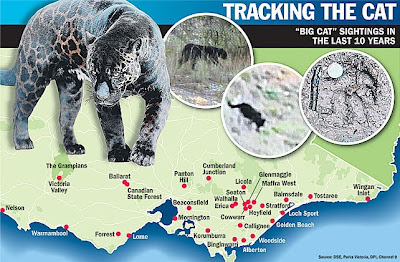 A Victorian government report has found it is highly unlikely there are any pumas, leopards, jaguars or other types of big cat roaming the state, Ninemsn reports.

While the report's author says it's impossible to prove the fabled big cats are not domiciled in Victoria, he's concluded it's highly unlikely they are.

"We can't say 100 per cent there are no big cats in Victoria, but we can say it is highly unlikely," Department of Sustainability of Environment zoologist Peter Menkhorst said on Tuesday.

Agriculture Minister Peter Walsh set the cat among the pigeons when he announced last month government staff would sink their claws into more than a century's worth of anecdotal evidence that big cats were living in regional Victoria.

It said no big cat had ever been detected in a formal wildlife survey, shot by a hunter or farmer or killed by a vehicle and no skeletal remains had ever been found.

"The study concluded the most obvious explanation for many of the reported sightings of `big cats' over the years is that they were large feral domestic cats," Mr Walsh said.

While he conceded big cat conspiracy theorists were likely to keep caterwauling about the alleged feline predators, he said they needed to come up with hard evidence.

"Unless that primary evidence is found, from our point of view the case is closed," he said.

However, it seemed the cat had his tongue when asked how much the report had cost.

Despite being pressed by reporters, Mr Walsh pussyfooted around naming a figure, saying the report was done within the existing resources of the department.

He denied it cost $1 million, as had been suggested by the opposition.

He said the cat was out of the bag last year when documents obtained through freedom of information laws showed on four occasions the department had told the minister there was no big cat.

"In 1982 there was a survey in Victoria which is on the record ... saying there were no big cats in Victoria," Mr Lenders said.