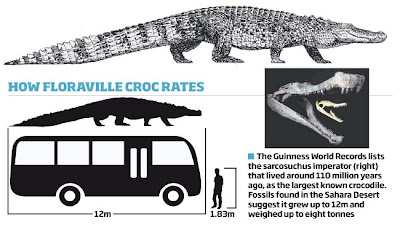 Scientists have found what they believe to be the jawbone of an ancient "monster" crocodile at a remote station in northwest Queensland.

They estimate the extinct saltie could have been the length of a Brisbane City Council bus and may have once roamed as far south as the state's capital.

University of Queensland palaeontologist Gilbert Price said the fossil was found by masters student Bok Khoo, from the University of NSW, during a dig last month.

"It would have been a monster, bigger than anything we have likely seen before," Dr Price said. "Possibly the biggest in Australia. It did not have any teeth attached but the tooth sockets alone were 35mm-40mm wide so you can imagine the teeth it had."

The front lower jaw bone was found near a disused road crossing along the Leichhardt River, near Floraville station, on July 10. It was found in an ancient riverbed deposit formed during the Pliocene and Pleistocene periods, one to two million years ago. Dr Price, who was on the dig, said the expedition involved keeping "one eye on the fossils and one on the riverbank" at all times.
"The area is full of saltwater and freshwater crocs, sharks, rays," he said.

Scientists believe the ancient crocodile may belong to the genus Pallimnarchus, an extinct mekosuchine crocodylian from the Pliocene and Pleistocene period. They will conduct radiometric dating but believe it belongs to the species Pallimnarchus pollens - the largest of the genus. 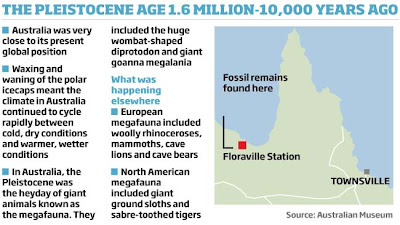