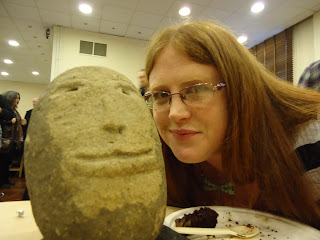 Sunday at the Weird Weekend 2012 In Woolfardisworthy, Devon.

By Tania Poole - from the CFZ Australia, now living in the wilds of a Yorkshire valley...


Apparently, during the night, here in Woolfardisworthy, a leopard was heard calling nearby! Jon McGowan, a large cat expert and hunter, heard it at about 5am, while he camped by the local Community Centre. Jon has heard many large cats before, so he should know. Yes, all manner of weird things come to the Weird Weekend, even cryptids like out-of-place leopards.
First of the day was Richard Muirhead’s ‘The Flying Snakes of Namibia’ where he looked into old stories from the 1950s where someone saw a flying snake – or thought they did. Since then and in many areas of this south western part of Africa, people who see lights in the sky at night, don’t say it’s a UFO like we would, but that it’s a flying snake with glowing lights on its head.
Lars Thomas gave us a run down on the cryptids of Denmark, ranging from bugs, beetles, wolves, and chipmunks, to trolls, hominids and lake monsters. Lars not only reads a lot, and travels to see  location of sightings, but he uses the microscope to discover what is out there – and has tested many hairs under a microscope, finding leopards, out-of-place cats, hominids, and even a platypus hair…from New Zealand. The old stories in Denmark of hominids and hairy creatures are found in many old documents from wooden carvings to old manuscripts. He also knows of a colony of Siberian Chipmunks that live in forests in Denmark, but is uncertain how they got there. The questions at the end even involved Trolls, and it was clear to Lars and many others that questions were asked in relation to the ‘Troll Hunter’ movie, released in 2011. 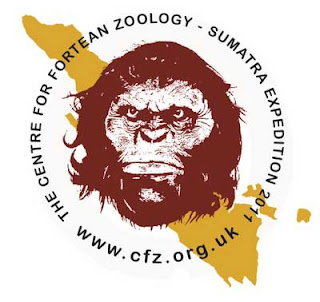 Richard Freeman spoke about the Sumatra expedition of 2011 – so far the largest group to go on an expedition, splitting 3 teams up to cover more ground to try and see the Orang-Pendek. Even our fair Rebecca Lang was mentioned, as she and Mike Williams were two of the explorers. There was no success in seeing the cryptid this time round, like the sighting in 2009, but Richard still has hopes to see something one day and tick this off as ‘found’ for the CFZ.
Lars and Jon teamed up to talk about the nature walk they took people on the grounds of the community centre, and Lars came back with photos of several bugs and flies – including over a dozen types of hover fly. 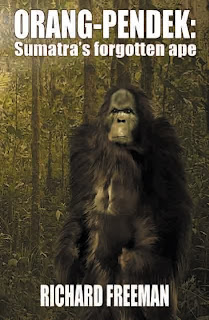 Ronan Coghlan, the CFZ’s ever hilarious trickster talked about Sinbad the sailor, and the cryptids he had encountered. This re-introduced us to creatures like the Roc, and the ‘Old Man of the Sea’ – from Sumatra and probably like our Orang-Pendek or even the Flores dwarf.
Jon ended the Weird Weekend by remembering those lost to us this year – Jeanett Thomas, the late wife of Lars, and Lionel Beer’s long term partner Joy who passed away this week. And there was acknowledgment of a CFZ birth and a wedding too.
The dinner was held in the hall this year, with a wonderful meal presented to us by the lovely ladies of the community centre, and we all ended the night eating a CFZ cake too. After dinner, a small few of us stayed behind and watched ‘Occasional Monsters’ a British film that, I think, was inspired by Nick Redfern’s book ‘Three Men seeking Monsters.’
Due to the excitement about possibly having a leopard nearby, Max Blake, Jon McGowan, Darren Naish, and Mark North appeared to walk away from the Community Centre equipt with headlights, torches and wet weather gear, into the dark fields of the Devon countryside in search of it. The rest of us (now an even smaller group) listened to Silas Hawkins read out a third story of Richard Freeman’s book ‘Green Unpleasant Land’ – this one a rather creepy one about the Bodmin little people. Richard is an excellent writer of the macabre and I recommend this book, and not just to those interested in forteana, but those who love ghost stories.

This ended the XIIIth Weird Weekend for 2012, and as a representative of the Australian CFZ gang, I was honoured to be there (It certainly helps when you are currently living in Yorkshire). Thanks to Jon and Corinna Downes, and all other members of the CFZ that helped me out this weekend. And thanks to Joe Thomas who taught me how to say Haribo properly! Those of you who have not been to a Weird Weekend, make an effort, DON’T MISS IT!

Posted by Iridia Furnival at 05:40