Is Devil cancer a parasite? 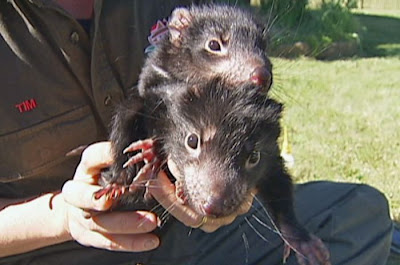 Scientists say strong evidence is emerging that the catastrophic Tasmanian devil facial tumour disease should be regarded as a parasite.

The disease, which has wiped out 80 per cent of the devil population in the wild, has been treated as a transmissible cancer.

But immunologist Greg Woods from the Menzies Institute says it also shows many classic parasitical characteristics.

"It's a cancer and a parasite," he told AAP before delivering his findings to the Australian Society for Parasitology's conference in Launceston.

"It goes from host to host and using each host to survive, and it will damage its host and move on to the next host so it's behaving like what we classically regard as being a parasite."

Also like a bona fide parasite, it uses the host's natural behaviour to spread itself, in this case the devil's insatiable appetite for violence.

"You drink water so you pick up a parasite," Associate Professor Woods said.

"With the devil, the tumour gets on the teeth and devils bite each other."

There is other evidence too - the disease avoids the immune response of the devil by covering itself in its host's proteins.

The question remains, though, whether it can be considered a "perfect" parasite like malaria because it has not yet managed to survive in more than one species.

But it is its parasitic behaviour that makes the tumour disease fundamentally different from the form of cancer that humans contract, Prof Woods said.

"The question is: Are cancers parasites because they live off the host?" he said.

"The thing about the cancer that us humans get is that once the human dies or recovers the cancer dies as well, whereas this tumour goes from host to host."

The origin of the disease has been traced to a single cell in a single female devil in the 1990s but it is unknown how she contracted it.

Scientists are in a race against the clock to find a cure, with some estimates suggesting devils in the wild could be extinct in 25 years, and there have been few breakthroughs.