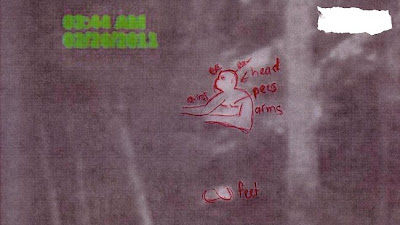 Previous analysis by the CFZ's Mike Williams has shown that this image is in fact of a possum on top of a rock! Note the thermal signature of the 'yowie' is the same as the surrounding trees and the rock - mystery solved!

In the wake of a visiting US television show, which claims to have recorded evidence of a yowie bellowing in remote bushland, Australia seems to be in the grip of 'yowiemania' - or at least our media outlets do.

Secret state government files have revealed a yowie man was recently sighted in the Blue Mountains, according to the Daily Telegraph.

The case emerged among almost 60 suspected panther, leopard and big cat sightings from the past decade sitting in the bowels of the government archives and obtained under freedom of information laws.

But just for the record, these reports haven't been sitting in the bowels of anywhere for a decade - they were liberated at least eight years ago and have since been published in Australian Big Cats: An Unnatural History of Panthers, a massive tome that dedicates more than 430 pages to exploring the phenomenon.

After an overseas TV crew last week claimed it had recorded audio of a yowie man in a remote region on the NSW-Queensland border, documents show the Australian version of Bigfoot was also allegedly sighted last year far closer to metropolitan areas at Springwood, west of Sydney.

In an email to National Parks and Wildlife Service rangers, the witness said he had filmed the creature in March last year and taken photos of footprints. He even drew the yowie man's head, pecs, arms and feet on the picture to make it clearer.

"I have had a seven-year history with this creature," the witness wrote.Canberra crypto-naturalist Tim The Yowie Man, who claims to have seen a yowie in the Brindabella Ranges in 1994, said he was interested in the latest sighting.

"The Blue Mountains has been a common spot for big cats, obviously, but it is not unusual for yowies either," he said. "I have no doubt people believe they are seeing something unusual but many can be cases of mistaken identity."

The NSW Environment Department declined to comment last week. Three years after a government study found there was no evidence of the Blue Mountains Panther - aka the Hawkesbury Big Cat and the Penrith Panther - rangers are still receiving sightings of the creatures.

In an unsolved attack last summer, a Bilpin family's pet alpaca was mauled to death by a suspected big cat that later gutted a kangaroo.

"'Big cat' kill report," Hawkesbury area ranger David Monahan wrote in an email to his boss a few days after the attack.

In June 2010, a witness claimed to have seen a cat the size of a german shepherd with yellow eyes beside a "roo on side of the road with head missing", a report said.

On July 13 last year, a man wrote to another ranger after spotting "the panther" on a trip home from Singleton a few days earlier.

There are 400-odd claimed big cat cases in recent decades.