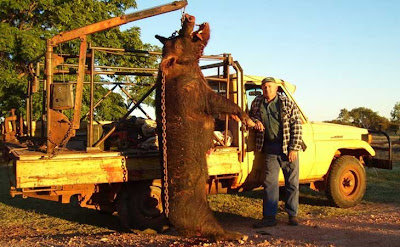 Doing the rounds since 2009, this powerful porker has captured the imaginations of many web surfers, however its sheer size has lead many people to label it a hoax.

In fact, the photograph is genuine.

At least that is what The Mercury newspaper in Tasmania is saying about this photo, rumoured to be of Pilbara pastoralist John Anick and his 'catch of the day' photograph snapped three years ago.

The 220kg beast was reportedly eating a cow when first seen by workers mustering cattle in a helicopter in Western Australia.

The paper said Mr Anick saw the beast again on a trip to check windmills on the property and shot it.

"I can vouch 100 per cent that it (the photo) was taken in the Pilbara and it is who I said it is," a source close to the Anick family said.

Back in 2009, WA authorities were clamouring to declare the photograph a hoax. Funnily enough, the Pilbara-Anick connection was also made in 2009 by an equally mysterious source - so we're not sure why it's news again this week. Perhaps it just takes a little bit longer for some stories to filter down south!


Anyway, if it's legit, then big cats and yowies aren't the only creatures to look out for in the Australian bush!