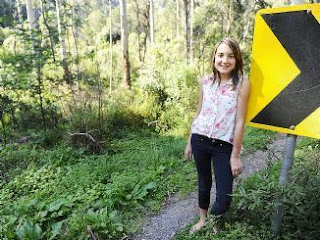 Yet another big cat has been sighted in Yarra Ranges.

This is the third time the big cat has been spotted in the area over the past few months.

A teen was out for an evening stroll along the Belgrave-Gembrook Rd at 6.20pm on Tuesday, April 3 when she heard a deep growl in the bushes.

Jasmina Palarama, 13, swung round and to her horror saw a “gigantic” cat or puma slink into the undergrowth.

The Selby teenager was walking with her brother and his girlfriend when they heard the growling noise and the bushes rustle.

She spotted the animal as it moved off.

“It was a very large black cat with a very large tail. I saw its back leg as it walked into the bushes and it was waist or hip height,” Jasmina said.

“I only saw the large cat for three or four seconds and it had very short black fur.”

A number of sightings have been reported to the Leader over the past few months.

One reader wrote they spotted an animal with a big, black long tail in Steels Creek recently.

And Healesville resident Irene Smith said she and her husband saw a “very beautiful” big cat on the road through Christmas Hills at 1.40am a while back.

“It was standing up on an embankment, it looked like it had black velvet fur,” she said.

A thoroughbred horse in The Basin suffered deep curved claw marks on its upper back flanks in November last year and owner Kate Barry is convinced a puma could be to blame.

The Wantirna South resident stables her seven-year-old horse Oki in a paddock in The Basin, and arrived one morning to find the animal in pain after being attacked.

“I think something came out of the bushes at him,” Ms Barry said.

“Whatever has come at him has come from the back and the claws have come in like hooks.”
Posted by RR at 21:39