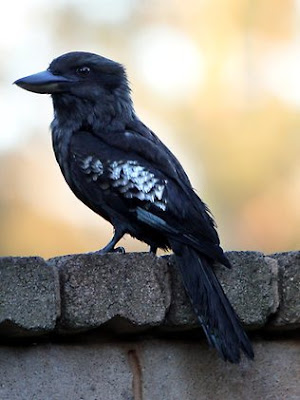 Deborah Winfield's suburban Sydney backyard has become a haven for unusual dark birds - but she had no idea what they were or where they had come from.

"They looked like kookaburras but were covered in beautiful glossy black feathers so I got on the net and it turns out they are kookaburras," she told the Daily Telegraph this week.

Australian Museum naturalist Martyn Robinson said: "It's the result of a genetic mutation called hyper-melanism - an excess production of dark pigmentation and a similar, but opposite, mutation to albinism.

"Not a lot is known about them but it appears it might be more common in young kookaburras and that they might change back to almost normal colouration on their first moult."

And that's where the story of the visitors, who appeared two weeks ago, gets even more strange.

"Now the younger black bird is actually getting darker, not lighter, and it only appears and stays with the two older black ones, and we even have a fourth darker kookaburra, but not as dark as the others, turning up too."

It should be noted kookaburras are very territorial and all of the birds visiting Ms Winfield's backyard will likely be part of the same close family group.