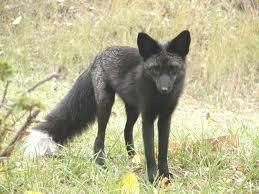 A Victorian woman, Diane, living near Ballarat recently reported having seen a black fox on her way to Beaufort from Ballarat.
She commented: “I saw the fox when I was driving out to my sisters out at beaufort, it ran out right in front of me, it didn't have the white tip on the tail though. It was last Tuesday 6th March 2012 at approx’ 6pm. It was just after Trawalla.”
While a very rare animal in Australia, black foxes are nonetheless a known part of Australia’s introduced fauna; being a melanistic version of the red fox, known colloquially as a darker variant of the silver fox. These animals have been reported in Australia since the 1920s and on some occasions have been mistaken for melanistic leopards (panthers) and occasionally described as a melanistic puma. One particularly pertinent example was a “Black Panther” reported shot by two youths near Frankston that was later described as a large Black Fox upon investigation by police.[1]
Rebecca Lang, co-author of Australian Big Cats: An Unnatural History of Panthers raised the issue of rare Black Foxes being mistaken for dark coloured big cats. She describes, in particular, an incident where she saw a quadruped which, while moving with a somewhat cat like grace was clearly neither a cat nor a dog. The books then goes on to further refer to a University of Western Australia Fox DNA project after one was shot and brought in for investigation on a property in South Australia.[2]
In the United States the melanistic phase of the Red Fox (Vulpes vulpes) is much more common than in Australia. The American Red Fox in its Black Colour Morph is described in detail in the Journal of Mammology in terms of, “The Silver-Black fox has the red and fulvous fur replaced by black. White banded guard hairs, which may be present in varying proportions, are responsible for the “silver” effect. The tip of the tail is usually white in all three phases.” [3]
Further to this the article claims that in the United States, Europe and Asia that, “This range in variation of these colour phases constitutes an almost perfect gradation in colour from the Red to the Black Fox. The normal colour of the Red Fox merges through graded bastard foxes into lighter coloured cross foxes, on through progressively darker foxes to full silvers and so through animals having less and less silver to the pure black individual.”
Silver Foxes, a rare but naturally occurring colour variation in Red Foxes, are far more prevalent in Europe and the United states due to their high status as a fur. Their value has led to their being deliberately bred with others of the same colour morph to produce higher quantities of the rare silvery black fur which sold for exorbitant amounts to fur dealers in the 19th century. Silver Foxes bred together invariably lead to a continuation of the colour, particularly after the third generation whereas in mixing with a Red Fox they will produce mixed offspring.[4] The lack of deliberate breeding and harvesting in Australia for the fur trade is a large component of their comparative rarity here in comparison with their European, Asian and American counterparts.
That being said they are, like the far more common red variety, now part of Australia’s ecosystem. If you see one of these rare, beautiful and unique animals consider yourself very lucky indeed, though the impact on native fauna of these introduced species is another matter entirely.
References:

[4] The Fur Trade of America by Agnes C. Laut, published by Kessinger Publishing, 2004
Posted by Dr David Waldron at 15:55