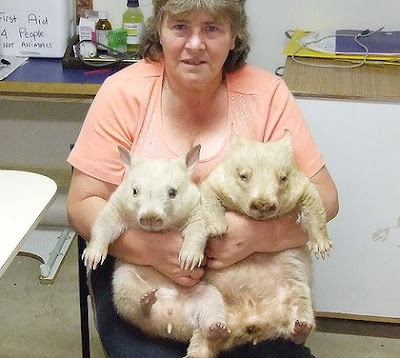 Last year we brought you the charming tale of an albino wombat rescued in South Australia and left in the care of, well, a wildlife carer. Nicknamed Polar, the ghostly white marsupial was the toast of Ceduna, the small town near where he was found, and proved an internet hit.

Now it turns out lightning, or in this case, whitening, can occur in the same place!


Val Salmon, who has been rescuing wombats since she was 14, said Icy and Polar were from different families and aged 14-18 months. The two wombats have been nursed back to health, with Polar now weighing 10.75 kilograms, and Icy 10.45 kilograms.

Under South Australian law, rescued wombats cannot be returned to the wild and are usually adopted by zoos or other educational parks after they recover, but some of the rescued animals at Ms Salmon's centre are so badly traumatised no one wants to adopt them.

The centre - which is split between Ms Salmon's half-acre backyard and a 200-acre fauna park - is home to eight wombats, eight joey kangaroos, birds, possums, emus, pet lambs and sheep and many lizards.

Ms Salmon manages the Wombat and Fauna Rescue Centre "off my own bat" and runs a free daily educational talk for tourists that is funded by donations. But she is hoping to get more contributions so she can build up the fauna park and provide a permanent home for all the rescued native animals.