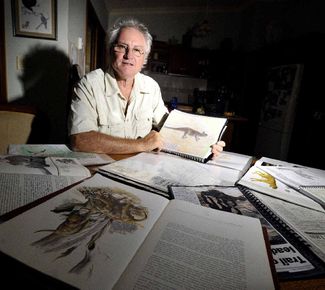 The Northern Rivers may be home to a thylacine-type animal thought to be extinct on the mainland for more than 3000 years, according to a wildlife expert.

With recent sightings of an unusual animal reported in the Nimbin Valley and Byron Bay, and many more sightings in previous years across the region, wildlife expert Gary Opit said a thylacine was a possible explanation.

Mr Opit is an expert in identifying fauna and hosts a weekly wildlife segment on ABC North Coast.

He said he had received about 50 reports of a creature he calls the "mystery cryptic animal of Northern NSW."

Many of the sightings have occurred around Mullumbimby and Byron Bay.

One of the most compelling accounts came from a Byron Bay veterinary nurse in 2008 when she saw a large fawn creature weighing about 18kg in her backyard.

"At 6am she heard a sound that was like possum grunting," Mr Opit said.

"She saw what she at first thought was a dog about to attack a cat and rushed between them to protect the cat from the dog and realised it wasn't a dog.

"It was nothing like a dog. It was dog sized. It gave these bizarre possum like coughing grunts at her. She observed it for 5 minutes."

Mr Opit himself has encountered a similar animal on four occasions, once in 1969, on the Pacific Hwy, north of Beenleigh, and three times since 2007 in the Billinudgel nature reserve at Yelgun.

The animals could be thylacines or the marsupial lion, Thylacoleo carnifex, he said.

"There is nothing in the fossil record of the thylacine on the mainland since 3000 years ago, but there have been lots of reports of them from the early days of settlement to the present.

The marsupial lion was only known from fossil specimens which were 38,000 years old.

The thylacine was perceived to be extinct 50 or so years ago, he said, which made it much more likely it could still be in existence.

"It is more than likely they are all of the one species," he said.

Byron Bay biologist Mary Gardner has also seen an unusual animal which she was unwilling to try to classify.

In late October or early November last year she was walking along Lighthouse Rd at Byron Bay with a friend when both saw the animal.

"It was something that does not fit in with anything I know at all.

"It had a long snout, thick rounded ears, a bony rump; it had a long wiry tail and a lean, hard body with stripes toward the rump."

Ms Gardner said when she first saw the animal she thought it would hop because it had long back legs and a raised rump, but was surprised when it moved with a rocking pacing gait.

She knew of two other local people who reported seeing an animal "which confused their expectations," at about the same time.

Ms Gardner said the starting point in determining what the animal was would be to discover what it was eating.

If someone could gather some good evidence then research could possibly be done, she said.
Posted by RR at 07:04