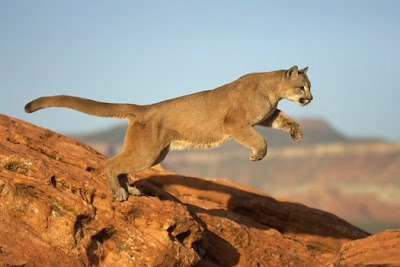 Yarra Ranges residents believe pumas are not the only big cats to roam the hills, according to the Free Press Leader.

Healesville farmer Ken Lang believes there are both leopards and pumas living in the area.

“When I first came here in about 1980 a neighbour complained they found two dead lambs that had been chewed, high up in the fork of a tree,” Mr Lang said.

He said several years ago a big cat tried to pull down a pony on Don Rd, Badger Creek, leaving the animal with big claw marks down its flanks.

“Pumas eat anything from insects to antelopes, but I doubt they could try and pull down a pony.

He regularly loses stock to foxes and eagles, and the occasional wild dog - and is adamant he has seen a large black animal stalking his deer.

He said he had talked to a Healesville plumber whose father was in the Australian army when the American officers were rumoured to have released pumas into the Victorian countryside.

Mr Lang said the soldiers released the large cats onto a farm in Gippsland, and said the felines would come up to the farm to be fed for the first six months after their release.

After that they were never seen again. Leader has been inundated with phone calls and letters following last week’s report Cat scanned (February 15), with residents confirming sightings from Dixons Creek, Gruyere, Gembrook, Emerald and Upwey.

Toolangi naturalist Bernie Mace has researched big cat sightings for more than 30 years and has seen and heard pumas in the area.

“It is my belief that we have at least one exotic species of big cat in Victoria which is the puma, Felis Concolor,” Mr Mace said.

“If a puma doesn’t want you to find it, you won’t because they are brilliant at keeping out of sight.”

He said he had talked to a family whose encounter with a leopard matched the physical description of the animal.

Mr Mace said the sightings of big darker-coloured cats could be a “melanistic” puma, which are distinctively black.

The scientist said he had talked to witnesses who had been at the farm where American soldiers set a puma and her cubs free.

“The farm had changed hands a couple of times by the time I got there, and I was shown the spot where the pumas were released,” Mr Mace said.

“I believe the pumas were a popular US mascot when the soldiers were in Australia, and I’m of the belief there were several releases around Victoria.”

He said there must be a “nucleus” of male and female pumas, otherwise there would be significant genetic issues.

You can explore the American troop theory and several others in the book Australian Big Cats: An Unnatural History of Panthers.
Posted by RR at 18:55