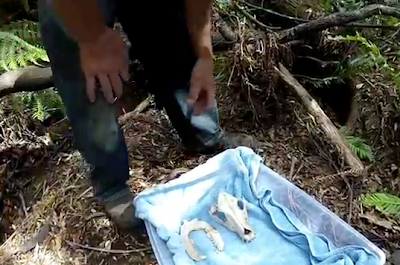 A discovery of an animal skull in regional Tasmania caused much excitement today in Australia, but it turns out the animal remains are nothing more than a dog - not a Thylacine as first claimed.

Updating their website several hours ago, the skull's discoverers - brothers Levi and Jarom Triffitt - said the results were in.

"The museum have told us its a dog skull but still can't identify what sort, our story is as we have filmed it bar the lobster which was filmed 2 months ago, however we were looking for﻿ lobsters and to find this skull was an amazing experience we'll never forget, we will still live in hope they are out there somewhere..."

The trail bike riders discovered the skull while filming during a ride through bushland.

They say they were riding in bushland in central northern Tasmania last week while filming stunts for a promotional video when they came across the skull.

"Lot's of people think 'dog', but when you actually get on Google and compare it to your normal dogs that are in Tasmania, the closest thing we could find it to was an American timber wolf, which I don't believe we have here," Jarom said at the time.