A bunyip with bite 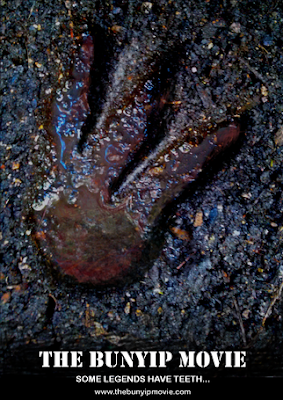 Is it something in the air?
We're not sure, but The Bunyip Movie is the fourth Aussie cryptid film on the books in the past two years, albeit another horror much along the same lines as Gone Missing (except the big cat has been replaced with a feisty bunyip).
And they have all passed through the Blue Mountains shooting their Yowie/Bunyip-related docu- and mockumentaries.
So what's the premise?
Following in the steps of The Blair Witch Project, the original suspense horror Alien and the inspired crowd-sourcing heart of films like The Tunnel, The Bunyip Movie* (working title) is a micro-budget suspense horror being shot in New South Wales, Australia.
According to the script...
Entrepreneur Tanc Lorenzo has just sold his tech security startup, ThinkTanc, for millions. As he and his small team of staff set out on their usual monthly team-building weekend, the new Board of Directors makes their presence known. No longer will Tanc's team-building trips consist of death-defying sky-dives, supersonic flights or bungee jumps - this time, he's taking the team on an easy 2-day hike in The Blue Mountains.
But when Tanc disappears on the first night, the team discover that their tame weekend away is turning out unexpectedly. Pursued by an unseen and malevolent creature in the harsh Australian wilderness, the group will have to overcome all odds just to survive.

Who knows, they may well come across some real cryptids during their shoot!

Of course the Blue Mountains are better known for bush-bashing Yowies rather than water-dwelling Bunyips - a small technical detail!

Can we expect an eyeful of Aussie cryptid entertainment in 2013? Watch this space...
Posted by RR at 06:38