Yesterday we brought you the story of a potential case of mistaken identity involving the 2009 yowie sighting at Mt George, NSW.

But let's revisit what the two women claimed in the aftermath of their sighting:

"I looked back up at the road and I saw ahead in the headlights this big hairy animal thing on the side of the winding road," Faye said. "It was about eight foot tall and four foot wide."

Alana said they yelled out "holy hell" along with a list of other unmentionable words. "We panicked," they said.

"I couldn't turn the car around because I had the trailer and the road was too narrow," Faye said. "I was s**t-scared and thought I better not mess with this thing in case it lifts the trailer up and tips us over the bank edge."

Keeping her foot on the accelerator and speeding past the thing, Faye said she turned to Alana and said: "Did you see that? She said in a scared voice: 'Do you mean that thing that looked like a Big Foot?' I said: No it was a Yowie." And Alana screamed back: "Same thing!".

"After we reached the top of the hill I wanted to turn around and get a photo with my mobile phone," Faye said.

But Alana was too scared to go back. She said if the passenger window had been wound down she could have reached out and touched it.

Faye and Alana said the hairy thing stood perfectly still "like it was at attention".

"Its back was facing us and it was looking into the embankment next to the road and it had dark chocolate brown hair which was all matted," Alana said.

They described the creature that they saw as being "eight foot tall, four foot wide" with dark matted hair.

Hardly comparable to Naden's description, which has him at 177cm tall - five foot 10 in the old scale.

The pair also mention they were fearful the creature might lift the trailer and tip their car over the edge of the steep embankment.

It seems unlikely that driving past a man of average height would invoke the same level of fear. And even given the fact Naden now apparently sports an impressive afro, grown during his years on the run, could his new 'do really be mistaken for a thick body-covering coat of hair?

So once again we revisit yesterday's question - Hairy Man or hairy man? 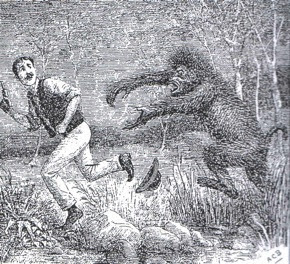