Michael Sharland and the search for the Thylacine 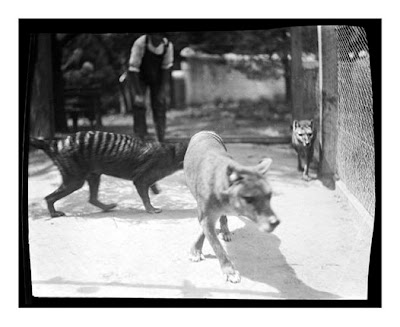 In 1938, Michael Sharland led a Royal Zoological Society trip to the western Tasmania in search of the thylacine. They found evidence of existence of the thylacine, bringing back stories, photographs and casts of footprints (though they did not see an actual animal).
In his report, Sharland recommended that an area of the NW be reserved for the protection of the thylacine. These photographs were taken by Sharland of thylacines in the Hobart Zoo (above) and of the hunt (below). 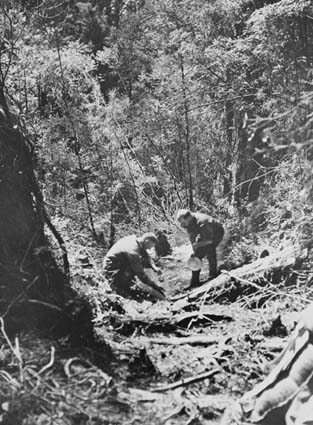 "IN SEARCH OF THE THYLACINE"

Describing an expedition made late In 1938 to the country between the Gordon River and the Frenchman's Cap, a booklet by M. S. R. Sharland, of Sydney, entitled "In Search of the Thylacine," contains much interesting information about the fast-disappearing marsupial wolf, or, as it is more commonly known, the Tasmanian "tiger".

Mr. Sharland explains that the thylacine exists today as but a remnant of the numbers which, 50 or so years ago, roamed the countryside, feeding on marsupials and sheep. Today it is seen only by the few trappers and prospectors who venture into the remote parts of Tasmania.

Mr. Sharland is an expert on Tasmanian fauna, and his opinions and recommendations must he seriously considered. On this expedition he represented the Royal Zoological Society, and his principal object was to determine to what extent the country was inhabited by the thylacine and to examine the area generally to decide whether it was suitable for a faunal sanctuary.

Mr. Sharland stresses the fact that the thylacine is no longer a menace to   sheep owners, since it is now isolated in remote parts of the State, and that the animal possesses a unique scientific value. Sanctuaries are needed for its protection in areas whore it is likely to be affected adversely by encroaching settlement. He suggests that the area comprising the Raglan and Collingwood ranges and the north-western slopes of the Frenchman's Cap might be set aside as a sanctuary.
Posted by RR at 20:37