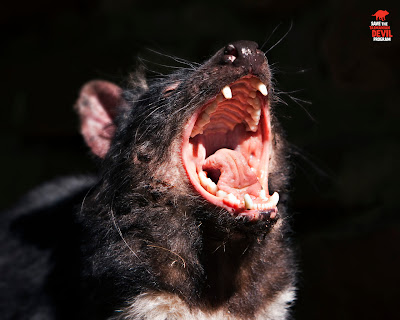 The deadly facial tumour cancer plaguing the Tasmanian Devil has been found in an area thought to be free of the disease.

The disease has been confirmed across more than 60 percent of Tasmania, but it came as a surprise that it was found in one animal in the Zeehan area in the state's west.

The furry marsupials were declared endangered in 2009 after the contagious cancer began sweeping through the population, disfiguring their faces so badly they are unable to eat and starve to death.

Estimates suggest that some 70 percent of devils have already been lost to the infectious disease, which is spread by biting.
Posted by RR at 08:37