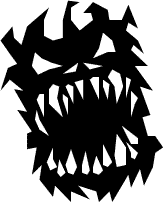 Bigfoot. Werewolves. Vampires. Succubi. Water monsters. Dragons. Are they merely all embroidered primal memories, part of an innate 'predator identification' system that keeps modern humans hyper vigilant to the threat of potential predators?
Do these frightening creatures only exist in our imaginations - terrifying memories of a time when humans were prey for a range of fierce predators? 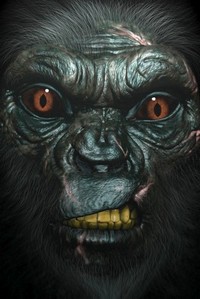 Salon.com this week has an interesting article entitled 'why we invented monsters', revisiting a not entirely original premise that stories about dragons, ape men and other frightening beasts are merely echoes from the days of our primitive ancestors, who regularly witnessed dinosaurs and other creatures attacking and eating their brethren. The article's author Paul A. Trout, in discussing his new book on the same subject, Deadly Powers: Animal Predators and the Mythic Imagination, writes:
"Monsters fill the mythic landscape. In Hawaiian myth, there is a human with a “shark-mouth” in the middle of his back. In Aboriginal myth, there is a creature with the body of a human, the head of a snake, and the suckers of an octopus. In South American myth, there is the were-jaguar; in Native American myth, there are flying heads, human-devouring eagles, predatory owl-men, water-cannibals, horned snakes, giant turtles, monster bats, and even a human-eating leech as large as a house. In Greek myth, one finds Polyphemus, the one-eyed cannibal giant; the Minotaur, a monstrous human-bull hybrid that consumes sacrificial victims in the “bowels” of the subterranean Labyrinth; and Scylla, the six-headed serpent who wears a belt of dogs’ heads ravenously braying for meat...

"Every day over the course of several million years, our ancestors saw (and heard) living creatures being torn apart and devoured by hungry animals — with some victims still kicking as they were eviscerated and dismembered. No wonder our brains are wired to make us dread this awful fate, and that the stories we tell ourselves reflect this dread and attempt to express it — press it out.

"The archetype of the monster is an expression of this primal fear writ large, exaggerated and intensified to an outlandish degree. But why does this primal fear take the form of a “monster,” that is, a predatory creature that grotesquely mixes animal or human-and-animal physical features? In what way did our experiences as a prey species contribute to the formation of the mythic monster ?"
You can read the whole thing here.
Trout's article reminded us of another book recently brought to our attention, out for a couple of years now, Them and Us by Danny Vendramini, which raises the spectre of cannibal neanderthals, who he argues terrorised early man, raping and killing (and in some cases eating) hapless humans.
We're still awaiting our copy in the mail, but in his book, the Australian-based Vendramini examines, among other things, the pervasive belief in ferocious nocturnal predators that prey on humans after dark. He reveals it to be yet another vestige of Neanderthal predation. We fear dark forests because Neanderthals were nocturnal hunters. You can download sample chapters for here.
Vendramini, a self-described Darwinian scholar, has put together this short video about his book, and it makes for interesting viewing -
But his refreshing treatise doesn't quite stretch to explaining, for example, anything about multiple witness sightings or physical trace evidence left behind in many bigfoot (and other cryptid) cases. Or deal in yet-to-be-discovered species of ape, for that matter. Yet. The book may well cover those topics, in which case we will update this post with our thoughts.
So is Bigfoot a living breathing archetype perhaps? If we all mimic storybook hero Peter Pan and say "I do believe in Bigfoot! I do! I do!" will it make it thus? We'd love to hear what you think.
Posted by RR at 08:17

Labels: bearded dragon, bigfoot, danny vendramini, paul trout, the yowie, them and us