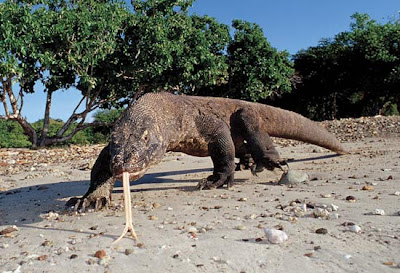 A new study has shown that the effectiveness of the Komodo Dragon bite is a combination of highly specialized serrated teeth and venom. The authors also dismiss the widely accepted theory that prey die from septicemia caused by toxic bacteria living in the dragon’s mouth.

Using sophisticated medical imaging techniques, an international team led by Dr Bryan Fry from the University of Melbourne have revealed that the Komodo Dragon (Varanus komodoensis) has the most complex venom glands yet described for any reptile, and that its close extinct relative Megalania was the largest venomous animal to have lived.

The work will be published in the next issue of the journal ‘Proceedings of the National Academy of Sciences’ and will be available in the Online Edition this week.

“These large carnivorous reptiles are known to bite prey and release them, leaving the prey to bleed to death from the horrific wounds inflicted. We have now shown that it is the combined arsenal of the Komodo Dragon's tooth and venom that account for their hunting prowess,” said Dr Fry from the Department of Biochemistry and Molecular Biology, Bio21 Institute at the University of Melbourne.

“The combination of this specialized bite and venom seem to minimise the Dragon's contact with its prey and this allows it to take large animals.”

Komodo Dragons are native to the islands of Indonesia, with adult males weighing over 100kg, and exceeding 3 metres in length. They have around 60 highly serrated teeth which are frequently replaced during their lifetime. 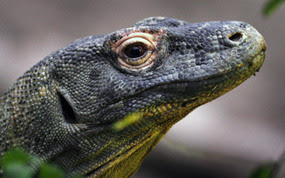 The researchers conducted a comprehensive study of the Komodo Dragon bite, employing computer techniques to analyze stress in a dragon's jaws and compare them to those of a crocodile. The dragons were found to have much weaker bites than crocodiles, but magnetic resonance imaging (MRI) of a preserved dragon head revealed complex venom glands and specialised serrated teeth which create deep lacerations for entry of the venom.

“We believe that the dragon is able to weaken and immobilize their prey with a venomous bite that increases the damage done by their long serrated teeth,” said Dr Fry.

The researchers located and surgically excised the glands from a terminally ill dragon at the Singapore Zoo, and used mass spectrometry to obtain a profile of the venom molecules. The team also analysed which toxin genes were expressed in the dragon’s venom gland.

The effects of venom were also tested by the team and found to be similar to that of the gila monster and many snakes which cause a severe loss in blood pressure by widening blood vessels, thereby inducing shock in a victim. These findings may explain the observations by Dr Fry and others that Komodo
Dragon prey become still and unusually quiet soon after being bitten. Bitten prey also bleed profusely, consistent with the team’s discovery that the venom was also rich in toxins that prolong bleeding.

The researchers also examined fossils of the Dragon's giant extinct relative Megalania (Varanus priscus). From similarities in skull anatomy they determined that this seven metre lizard would have used a similar venom and bite system, making it the largest venomous animal to have ever lived.

The work will be published in the next issue of the journal Proceedings of the National Academy of Sciences.
Posted by RR at 07:56