Culling not the answer in fight to save devil 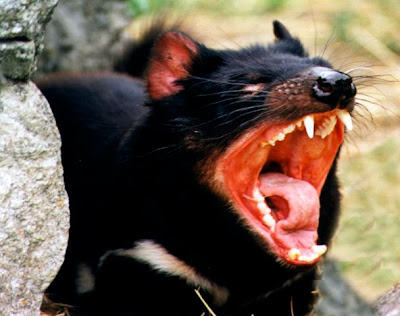 The Tasmanian Devil is a unique animal, claiming the title of the world's largest surviving marsupial carnivore after the extinction of the Tasmanian tiger. Its survival is being threatened by an equally unique disease - Devil facial tumour disease, or DFTD, is one of only two or three infectious cancers in the world.

DFTD looks likely to cause the extinction of the Tasmanian devil without human intervention. The devil could become extinct on the Tasmanian mainland in as little as 25 years - a terrifying prospect when it is considered that the disease was first confirmed in 1997, only 14 years ago.

Science magazine Cosmos argues selective culling of sick devils is not the answer to saving the feisty marsupial. Read the entire article here.
Posted by RR at 07:50