The Thylacines of Irian Jaya

"In the early 1990s, an amateur researcher called Ned Terry told of visiting an unidentified mission station in West Irian and hearing reports of an animal strikingly similar to the thylacine. (See Bunyips and Bigfoots, pages 112 - 113.) Then, in 1997, small, contradictory paragraphs starting appearing in the world press about its presence in the Indonesian half of the island. About this time, I managed to renew my acquaintance with an old friend, Gerry van Klinken and was surprised to discover that he was now the editor of Inside Indonesia.

"Gerry was kind enough to go an internet search for me, and was able to discover what appears to have been the original article which started the ball rolling. It was from Suara Pembaruan ("Voice of Renewal"), a Protestant newspaper with good connections in Irian Jaya. The information itself appears to have originated from the local Indonesian governor. Here then is the translation. I might add that, although Gerry helped me with the vocabulary, the responsibility for the translation is mine, and I have aimed for verbal accuracy rather than elegance." 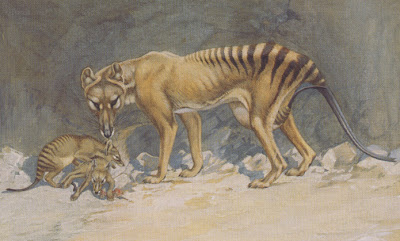