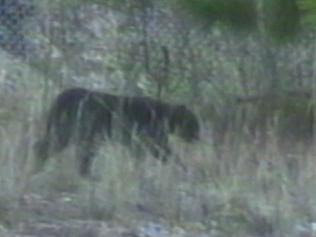 The Lithgow Mercury has a story about another local big cat sighting:

"Lithgow's Black Panther has been here today and gone tomorrow leaving little evidence it ever was and those who claim to have seen it in total shock over the years.
The last reported sighting was in early August this year not far from Crane Road.

One long term resident of Lithgow, Marika Vervoorn, has also witnessed the elusive black panther in recent years up near her son’s property at Mt Walker and says people should not be sceptical about reported sightings.

“I travel up that road regularly,” Ms Vervoorn said.

“On one trip about five year ago the panther jumped out about 500 metres in front of my car.

“As it neared my son’s gate it turned allowing me to get a good look at its profile.

“It was definitely all panther in the face, black all over and as big a Rottweiler but heavier.”

Ms Vervoorn got in touch with a black panther researcher, Michael Williams, who told her there had been 600 sightings reported over the years in the area stretching from Jenolan Caves through to the Queensland border.

Mr Williams’ aim was to raise awareness that the black panther or panthers are out there and to report sightings in an attempt to keep track of this very shy over sized kitty on steroids."
Posted by RR at 18:38