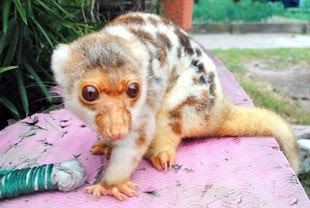 A mysterious spotted creature dropped off at a zoo in China is actually a type of possum most likely smuggled into the country as a novelty pet.

Keepers at Wenling Zoo in south-eastern China were baffled by the bug-eyed, long-tailed critter, after it was handed in by an unknown man last week.

But not long after the zoo was contacted by Danny Li, an animal enthusiast who lives in Hong Kong, who told them it was a spotted cuscus — a marsupial native to northern Australia, Papua New Guinea and Indonesia's Maluku Islands.
Posted by RR at 07:48