A big thank you to David Hearder for digging up and sharing these gems about Narrabeen's mysterious elephant man (which also included a rare picture!) - a strange upright-walking humanoid elephant creature that lumbered across a Sydney road one evening in the late 1960s.

Witness Mabel Walsh was driving home with her nephew John when she saw the strange creature walk out of the lake and into nearby scrub.

"It was a bit over 4-feet tall, with dark grey, tough leathery skin, like an elephant’s. It had small front legs and walked on its hind legs, which were thick and round like an elephant’s… I didn’t notice a tail or ears, but it had small eyes and smaller front legs or arms. Its head reminded me of an ant eater’s. Its trunk was rigid, squared off at the end and stuck down and out at an angle.

"It had a strange shuffling walk, but was quite fast. It shocked me. It was a peculiar looking thing. I’ve never seen anything like it. We saw it only for a few seconds."

The sighting puzzled and intrigued residents living near Narrabeen Lakes, a large estuary that is a popular fishing spot. 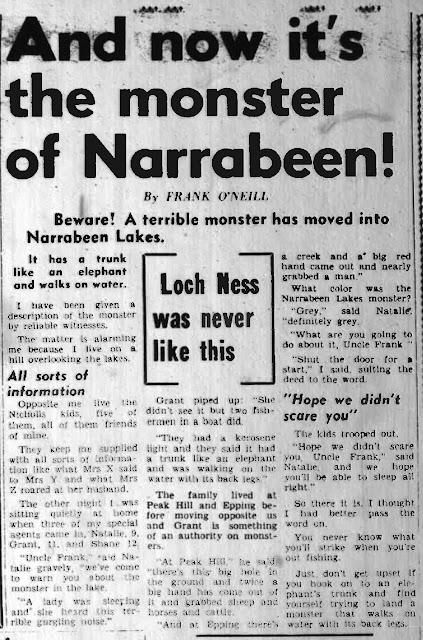 Author and UFO researcher Bill Chalker looked into the elephant man sightings, which occurred around the same time as a rash of UFO sightings in the area, but concluded in his talk at the 2001 Myths & Monsters conference:
"It would probably be erroneous to speculate that the unknown creature reported above was related in someway to UFOs. There is no direct connection evident, and because the creature or one like it was seen again in the area, it would probably be more correct to suggest that the creature was an unknown species perhaps local to that area.
"During 1971 a lady was awoken by a terrible gurgling noise but saw nothing. Two fishermen in a boat, saw something by the light of a kerosene lamp. It had a trunk like an elephant and was walking on the water with its back legs. It was described as being grey in colour.
"During the late 1970s with nothing better to do, I spent a number of evenings loitering around the Narrabeen Lakes environs checking out the areas involved in these stories. Unfortunately no “elephant” humanoids were seen and I was not able to determine any substance to a prosaic “elephant” connection. It is interesting that humanoid elephant – headed beings are a major feature of Indian religios mythology – namely ganesha."
So what was the elephantine-looking creature, which also had a "head like an ant-eater"? A figment of imagination? An unknown species?
Like us, David Hearder is still wondering. "No, I don't know what it could have been either, perhaps a disoriented frogman on exercise (police or navy)?"
Perhaps the last word should go to Mrs Walsh, who, as they say, knows what she knows: "Call me a nut if you will but there's a strange creature in Narrabeen Lakes."
Posted by RR at 09:24