More on that Queensland Tiger... 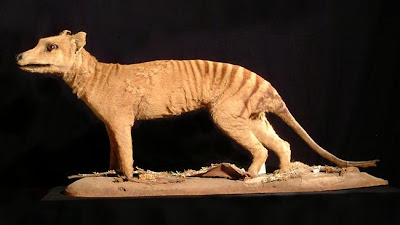 We reported recently via ABC Radio that a Daisy Hill family had spotted a Thylacine near their property. Queensland newspaper the Courier Mail has followed up the lead...

First there was reports of a black panther at Eagleby, and now Daisy Hill residents Lisa and Sean Smith believe they have spotted the extinct Tasmanian Tiger.

However, Mrs Smith said one could very well be living in the Daisy Hill Forest.

``A few years ago we were standing in the back yard and we (husband Sean and father Barry) saw this fox-like creature staring at us,'' she said.

``Then we looked at it properly and it didn't look like a fox at all, it had a long thin whippy tail, stripes on its back and it was a lot bigger than a fox.

``A few years ago we were in Tasmania and saw this book (on Tasmanian Tigers), and thought it looked a lot like what we saw. We sight it every now and then and can hear it screaming and making noises at night.''

With their home backing on to the Kimberly Forest Park which connects to Daisy Hill Forest, Mrs Smith said there was definitely something interesting in there.

``I'm happy to think something like the Tasmanian Tiger defied the odds and survived. We're trying to take a photo for proof next time we see it, but sometimes we won't see it for a year, then it comes back.''

According to the Tasmanian Government's Department of Primary Industrys, Parks, Water and Environment, the thylacine (Tasmanian Tiger), was the the world's largest marsupial carnivore and fossils and Aboriginal rock paintings showed that the thylacine once lived throughout Australia and New Guinea.
Posted by RR at 20:23