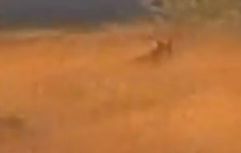 What is it? Felis or canid?

Aussie Ira Fehlberg, who shot the footage above, writes:

"A coupla years ago I was driving down a remote bush track doing some fishing exploring. Now I do a bit of travelling all round WA & Aus and much of it in pretty remote areas, like everyone I've heard the stories of big cat sightings and its something that I've always taken an interest in, its always in the back of your mind anyway...

So here I am early one morning, just after sunrise, driving down this bush track in the middle of now where. We hit some pretty goods corrugations and I happened to ask the mate (who shall remain nameless to protect his gumbyness) I was travelling with if he would mind getting my video camera out and getting a few shots of the corrugations for the home video I usually make of my fishing trips.

He got the camera out, took a bit of video and I said to him just leave the camera on for a bit in case there are some more good ones. The track was sorta random, okay in some spots but rough as in others, anyway the track came into a hard packed sand section and there is my mate with the camera in his lap switched on and rolling. We cruised on for a bit, I was prolly sitting on about 40ish and then all of a sudden bang there it was!

The first time it came into our view it was actually in the air, a metre and a half off the ground in mid air, halfway through a leap! It hit the ground halfway across the road, took a bound and it was off into the bush quicker than you could say what the hell was that! It crossed the road directly in front of us maybe 20-30 metres away.

Now I'll be totally honest and say that it all happened so fast that all I really saw was a big tan animal bound across in front of me! I didn't see the head or the tail, there was enough time to sorta see the main body and that was it, it was gone.

We both looked at each other and said what the %$#@ was that?! I braked hard and stopped right where it went off the track and we could see it running through the scrub to our left, "get out & get it on cam I yelled at my mate" as I was braking. The scrub was pretty high and before we even stopped I knew that the best chance I had of a clean shot was from an elevated position so as we stopped my mate got out and shot some video which looks like someone having a fit falling off a building, basically he tried to zoom right in and this bit of the footage is so shaky you cant see anything.

So I've done the whole stop the car, jumped out and in one motion (yes I can still move when I wanna) I've jumped straight up onto the bonnet and onto the roof of the 4WD. My mate threw the camera up to me and I quickly zoomed out and managed to get a few seconds of it running off. I was hoping it would stop and turn around of course but it never did. The footage you see of it running off is from this elevated position.

My gut feel initially was big cat, probably more just hope than anything but it was the right size and colour and the way it ran looked like a big cat but we both agreed we couldn't be sure positive as it never stopped or turned around and neither of us saw the tail or head.

We easily found the spot where it jumped across the road and I got some good shots of the prints it left.

To have any idea what it was I knew I'd have to show the tape to someone who knew about such things and I have a mate who has done a lifetime of hunting all around WA and he really knows his stuff. I showed him the tapes and he and his shooting buddy basically came to this conclusion. They say it was most likely a wild dog mainly because of the tracks it left, cats don't run with their claws out apparently. Do they come out when they jump but? I don't know...

However they both did concede that they couldn't say wild dog 100% for sure and that there was a small amount of doubt from two things that were a bit unusual about it. They said in all their hunting days in WA (100 years experience) neither of them had ever seen a wild dog that colour and they had never seen a wild dog yet that was all one colour like that, they reckon normally they are blotched or mixed colours sort of thing. They are pretty sure from the tracks that it was a dog but. I'm not expert but I think they are probably right.

Still it was a cool experience and it made me realise that even with a camera turned on in the car it happens so fast you've got to be so lucky to get it on video, if it did happen and the camera was turned off you'd be virtually no chance of getting it."