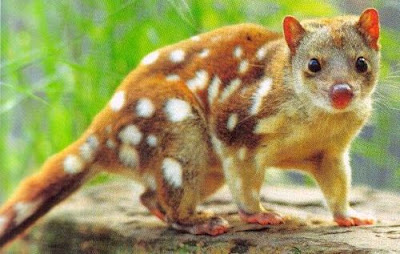 Quolls are high on the endangered list and could afce the same fate as the Tasmanian Tiger, wildlife groups believe.

Like the thylacine, the endangered spot-tailed quoll is a meat-eating marsupial. So plans to drop bait from planes over vast tracts of land in Victoria to wipe out wild dogs threaten the little creature's existence.

There are just a few hundred of the cat-sized creatures left.

"A 7kg spot-tailed quoll that picks up bait poisoned at a strength to kill a 40kg dog will go the way of its eastern quoll cousins, which are now extinct on the Australian mainland," said Jill Redwood, spokeswoman for Environment East Gippsland.

But Agriculture Minister Peter Walsh said baiting would be carried out.

About 5000ha of inaccessible land is expected to be included in the initial baiting.


Down in Tasmania, the Minister for Environment, Parks and Heritage, Brian Wightman, has urged Tasmanians to consider the lessons of the past on Threatened Species Day and learn how they can help protect the State’s biodiversity.

Mr Wightman said the annual Threatened Species Day, held on 7 September, is particularly significant this year because it marks 75 years since the death of the last known Tasmanian Tiger.

“The death of the Thylacine in the old Hobart Zoo in 1936 is a symbol of what we have lost and of the importance of doing all we can to help those species now under threat,” he said.

“The protection and conservation of our threatened species isn’t something that ‘someone else’ will look after – we all have a role.

“We can all be aware of what is on our land and how best to look after it.

“Building, vegetation clearing and gardening - all of these activities can affect threatened species. But if we know what lives on our land and what it needs we can really make a difference.”

Mr Wightman said taking care on the roads and disposing of rubbish correctly were also examples of things individuals could do every day to help out.
Posted by RR at 21:22